A bézier curve is a mathematical approach for modelling smooth curves that can be scaled indefinitely. They are often used in in vector based computer graphics e.g. for modelling the curved roads of a map. This page should document current use within OpenStreetMap and potential future use.

Barry Crabtree (User:Dotbaz) experimented with modifying Osmarender to output some segments as curves instead of lines (curved lines in SVG). This was back in 2006/2007. This was since set up as a lines2curves.pl script used by tiles@home (so bezier curves are appearing on the 'Osmarender' layer). See Osmarender/BezierCurves (TODO resolve duplication)

Some points about using beziers (appropriately).

Writing our own / using libraries

It might be good to write our own. For example processing can draw the curve but AFAIK it can't position and rotate text on top of it so, which we need.

Text on curves in Processing isn't totally trivial, but it provides helper methods to assist with working out where the curve is according to the parameter: for Catmull-Romm splines, for Bezier splines.

To disable the bezier curves for some ways (e.g. power lines, aerialways) add no-bezier as a css class in the style file.

Bezier curves have not been discussed so much recently. Please update the page with current statuses if you know more

Not automatically but add it to the API

I think it would be better to add such a feature to the API directly. So I wouldn't have to draw 10 nodes for a curve that will then be rendered as a real curve but I would draw one node at each end plus two as a reference for drawing the bezier curve. That way the renderer would know where to make curves and where not (and we wouldn't need error-prone magic). And, as I said, we'd need a lot less nodes. Have a look at Inkscape, there you can make nodes (each one seperately) smooth, that way it will ensure that the bezier nodes on both sides of a node are in excactly opposite direction (See [4]). This way we would avoid the annoying problem that when we add a little street branching off a street, there will be a little corner. What do you think? --Bkr 15:16, 4 June 2008 (UTC) 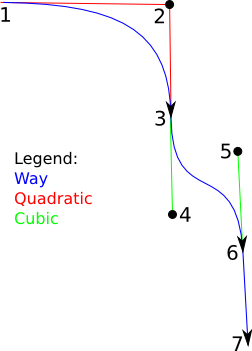 One way this could be done is to insert control points between nodes in a way's node list.