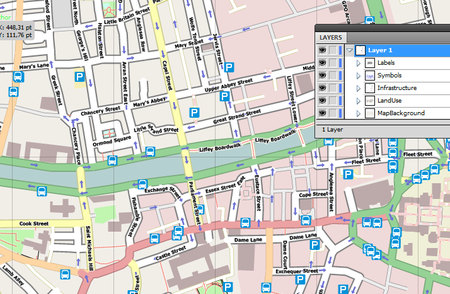 This page documents SVGs in context of OpenStreetMap. SVG stands for Scaleable Vector Grapics. It is an XML format for representing vector graphics.

Ways to create an SVG map from OpenStreetMap

There are several ways to create an SVG map from OpenStreetMap:

Often this will give an error "The load average on the server is too high at the moment" because the server will not produce an SVG when the server load is above 25. You can examine the Server Load Statistics to find a good time to create an SVG. It also means you may be asking for a complex area of the map (pick one of the following better approaches)
This is Mapnik rendering to a cairo surface (cairographics.org) The result is often rather bloated over-complicated SVG file. Maps are quite complicated, but Mapnik tends to create lots of little objects where one big object could have been used. This is particularly true of text on the roads, where each letter is a separate text element (twice)

Ways to pay for a pregenerated SVG map from OpenStreetMap

Software for working with SVG files

Wikipedia allows direct upload of SVG files. This is the preferred approach on Wikipedia for images which are essentially vector based. It's also good to be able to perform vector based tidying up tweaks in Inkscape prior to uploading. There are some small problems with Wikipedia's SVG renderer (one-way arrows). More information at wikipedia:Wikipedia:WikiProject OpenStreetMap#'Export' Tab. Example SVG image on Wikipedia: wikipedia:File:Holborn-viaduct-map.svg