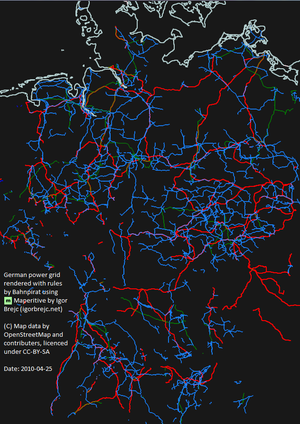 Maperitive is a desktop application which renders maps in real time using OSM and other sources of data.

It is a successor to Kosmos.

You can download the latest version of Maperitive from http://maperitive.net/download/Maperitive-latest.zip (requires .NET Framework v4.0). Keep in mind that it is still in the beta stage of development and as of now it has just a simple GUI and is controlled via a command console. Please note when using the command line the different use of / under Linux and \ under Windows.

Download the latest version of the Maperitive zip file from http://maperitive.net/download/Maperitive-latest.zip and unzip it into a directory of your choosing (it is probably sensible to remove the version number, because updates will go to the same place).

To run it simply double-click on maperitive.exe (you may find it helpful to create a shortcut on the desktop)

Download the latest version of the Maperitive zip file from http://maperitive.net/download/Maperitive-latest.zip and unzip it into a directory of your choosing. Maperitive also requires a couple of dependencies. These can be installed by opening a Terminal window and running:

Once these have downloaded and installed, navigate to the directory in which you unzipped Maperitive, mark the Maperitive.sh file as executable and run it. This can be done by right-clicking the file and changing the properties to "Allow executing file as program", alternatively run the following lines in Terminal:

Since Maperitive uses a proprietary file name extension for its rules files (.mrules), editing them using edit-rules may fail. To fix this, create the appropriate custom MIME type and mailcap entries. The following commands define a new MIME type for mrules files for the current user and set gedit as default application to edit them:

Download the latest version of the Maperitive zip file from http://maperitive.net/download/Maperitive-latest.zip and unzip it into a directory of your choosing (it is probably sensible to remove the version number, because updates will go to the same place).

If Maperitive fails to load the map on startup, edit your Maperitive.sh file like this:

X11 has to be installed on the Mac. Download it from XQuartz.

Download http://maperitive.net/download/Maperitive-latest.zip, unpack it and move the whole directory to the programms directory (or to any other place).

If you are using a version of Mono older than v5.2 then you can omit the --arch switch[2], as those versions default to 32-bit operation.

The starting of Maperitive may take a while, just wait.

You will need a file of OSM data. There are a number of ways to get this:

It is suggested not to use very large areas because Maperitive loads all the data into RAM. Cut the data off with Osmosis or Osmconvert you do not need.

It's a good idea to set up a directory for your working files with (for example) data, rules, scripts and outputs sub-directories.

Later examples assume your data is at c:\users\igor\documents\osm\maperitive\data\test.osm

To enter commands, click on the grey bar at the bottom of the screen (or simply press Enter) - the bar will turn yellow. Some commands are also available in the menus. Note that Maperitive only requires enough letters to uniquely identify a command. It fills in what it can as you go along.

By default, OSM 'standard' tiles are shown in the background (if you're connected to the internet). You need to relocate to match your data. For instance, this will take you to central London:

You can render data on top of the Mapnik background, or you can use a blank page:

Assuming your data is in a separate directory, it helps to make this the default, for example

To load the data you issue the command:

The map will be loaded and rendered using the default rules (which are in the rules\default.txt file which came with Maperitive). These rules are similar to normal Mapnik rendering. To save this moment for posterity:

Congratulations. You are a renderer.

To change the rendering rules, open the active rules, with a view to saving a copy in your working directory (best to File>Save As straightaway to rules\test.mrules):

When editing, you need to preserve the indentation. You could try changing some colours (most of the common colours can be entered as words). When you've made and saved some changes:

When you have saved your changes, you run

render the map again with the new rules. Maperitive shows the effect of the new rules in just a few seconds. To switch back to the default rules, you use the alias:

Maperitive remembers the locations of your rules, so you don't need to reload them. If you re-use an alias, it overwrites the old location.

The "wireframe"-Ruleset is a useful ruleset. It renders all lines whatever tags they have. This ruleset is pre-defined and has the alias "wireframe". You can use it with use-ruleset alias=wireframe followed by apply-ruleset

You can save a set of commands in a simple text file (known as a script). For example

You can then run all these commands at once:

To save all that typing, you could put a change-directory command in the scripts\default.txt file that came with Maperitive (but be aware it might get overwritten by an update). Alternatively, create a Windows batch file (a text file with a .bat extension) in your working directory containing: maperitive.exe scripts\myscript.txt and create a shortcut to the batch file on your desktop. Within the shortcut's file properties, you need to set Start In to the location of maperitive.exe. You can also use the maperitive.ico icon (same place as maperitive.exe).

The high-level structure of the rules file is:

The features section tells Maperitive what data you want to use. You can define a feature that only looks at areas, lines or points, or you can let it check everything.

The properties section lets you override Maperitive's defaults (eg the font it uses).

The rules section tells Maperitive what to draw for any of the features (sets of data) that match the stated criteria. Normally you would define a few properties, then draw something using those properties. You can change the rendering within each rule based on further tests, which makes it very flexible indeed.

The full list of commands can be seen by typing help-commands. They scroll past really quickly and the window is very narrow, so here they are listed as at version 809 (28 March 2010).

The full list of Keyboard-Shortcuts can be seen by typing help-keyboard. They scroll past really quickly and the window is very narrow, so here they are listed as at version 1154 (April 2nd, 2011)

Mapnik icons are included with Maperitive, but others are available (some of them may be subject to license, so at your own risk!) at:

Maperitive copies icons to the cache\images\ directory, and then simply refers to the filename. So once the rules have been used once, there is no need to be connected to the internet.

How to use Maperitive to work off line and display different options simply for the end user.

How to use Maperitive's find command.

Example for rulesets can be found under

Example for scripts can be found under