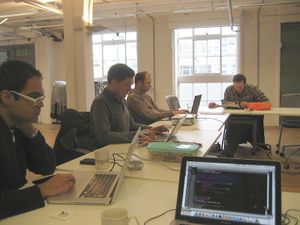 Here we are hacking (Saturday morning)
more photos on flickr

The London Hack Weekend Dec 2012 is a past event which took place on Saturday 1st and Sunday 2nd December 2012 in London.

Hosted by 10gen with food by placr.co.uk

Big thanks to our hosts: 10gen, the mongoDB company. (and Derick)

More big thanks to placr.co.uk who sponsored the hack weekend (a.k.a. paid for some lunch)

We're also listed on lanyrd where you can also add yourself as attending/tracking in order to help spread some social calendaring kudos.