Note that Task Manager US had a massive server failure and all data for all projects was lost. Version 2 is now live, but with no data.

We have created a detailed discussion on the OSM mailing lists (imports-us@ and imports@) in January and February of 2015. The lists seem to agree on our direction and process, following in the footsteps of NOLA's work.

How to get involved

Read about our recap and progress on our website!

Everything else found below on this page is background/technical information on the import which was prepared while this project was under consideration. It is not necessary to read on unless you want to learn more about how this project began.

Louisville's American Printing House for the Blind is an international institution. Using open data, they have created an app that helps blind and visually impaired people navigate cities safely!

APH uses Open Street Map (OSM) standardized layer data to import into their app. They load data into OSM from open data portals that have an open data license. The app uses audio to announce important locations as visually impaired people walk around.

Right now they either don't have, or have to pay for, good data about buildings, street addresses, parcels, sewer drains, manholes, power poles, parking meters, and street crossings.

The app is called Nearby Explorer and is a $99 Andoid App.

With the data they can 1) improve walking and driving safety of visually impaired people, 2) possibly charge less for the app, 3) serve as a model for other US city's open data, thereby increasing their coverage area.

The CDA has volunteered to help APH work with OSM to import the data properly, a process that is both technical and bureaucratic (mass data imports need much coordination with the OSM community). We also want to host Code for America's national Code Across hackathon February 20-22 at the APH facilities and make it the focus of Louisville's Code Across event.

Additionally, if successful, APH employees are happy to speak this summer at the national Code for America Summit and share this great open data success for APH, Louisville, and the CDA!

The City of Louisville Metro provides us with a public domain shapefile with high-quality building outlines (412,375 buildings, based on imagery updated in 2012, due for an update in 2015) and a shapefile of addresses (398,982 points, commercial and residential, updated daily, through January 2015).

According to the Data Policy page on data.louisvilleky.gov, the data is licensed free and without restriction. (Public domain)

"Data available through Louisville’s Open Data Portal is offered free and without restriction." 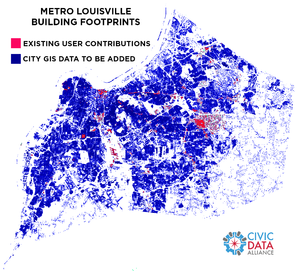 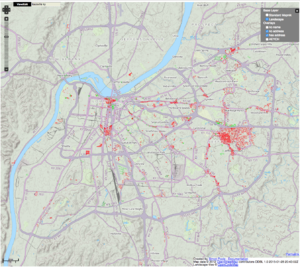 Our solution might be to load buildings with address data associated with it already, where possible. 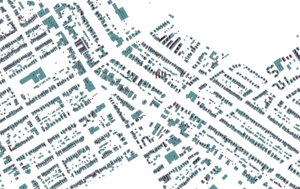 Sample of address data overlayed on building data. Note that addresses are centered over the center of the building footprint, if there is a building. Then they are centered on the parcel (parcels not shown in this image). In the case of condos, they are stacked and slightly offset.

Qualitative analysis manually comparing existing OSM data to city data in neighborhoods (Jtown, Highlands, Downtown) well known by contributers shows that the address and building data is of high quality. We will still be examining things closely during the import but we are confident that this will be a useful addition to the OSM community.

If building only contains one address, the following will be added to the area.

In the case with multiple addresses in different locations within the same building footprint, these tags will go on separate nodes with unit numbers:

Every building also has a special unique identifier:

This is used to later add height data to buildings when we get that sorted, to allow the supporting data organization (LOJIC) grab citizen OSM edits an import changes into their system, and also help with future updates.

There are not a lot of buildings already in OSM for Louisville, KY. As of January 2014 there are less than 5,800, which is about 1.5% of the total. Where there is overlap, we will preserver the OSM edits, unless the city data is obviously better on a case by case basis.

398,982 official address point data vs almost no existing data in OSM. We will manually compare any overlap and choose the best address locations based on our conflation with the building data and local knowledge.

In accordance with Import Guidelines, each uploader will use a separate user account specifically for this import. The user name will follow the pattern: <regularusername>_louisvilleimport

Here is where you can import the data area by area: http://tasks.openstreetmap.us/job/50

See the Contributor Guide for all the details!

We're starting to collect info from previous imports that may be helpful to our volunteers:

The folks who ran the NYC building import used a very similar process, and have a nice step-by-step video guide for getting started:

This is based on work from the DC and NYC and NOLA building imports, thanks to the folks who made that possible.