Our first Black Country Mapping event of 2009 will be in Sandwell (West Bromwich). Our base will be at the amazing and new Theatre 1 at "The Public". The venue has public wifi and to top it all off there is a beer festival running in the venue over the same weekend :-) The details of that are below. This party is sponsored by Cloudmade.

will be playing as part of the Beer Festival

West Bromwich is serviced by the Birmingham to Wolverhampton Midlands Metro (tram). Note that you cant take a bike on the tram, however if you take the train to the Hawthorns (From Birmingham Snow Hill) there is a cycle route (West Bromwich Parkway) that runs alongside the tram route all the way to West Bromwich, the first part is mapped, the rest into West Bromwich needs mapping. Alternatively, the closest main line station is Sandwell & Dudley which is on the line from Birmingham to Wolverhampton. Some of the fast London trains out of Euston stop here. Its a about a mile and a half from the station to the venue.

Mapping and beer? what could be better. The first West Bromwich Real Ale Festival is running at The Public over the same weekend as the mapping party :-) Couture cafe bar is hosting it, there will be a choice of 18 real ales and 2 ciders. Free live music during the festival is being sponsored by Major Key Studios and Fairbright Group, the Trevor Burton Band and Tipitina are two of the acts due to appear at the festival. There will be a bouncy castle for children on the town square and families and children are most welcome.

Our target area for the April mapping party is the area in the bottom right corner of the image below, ie West Bromwich and beyond. 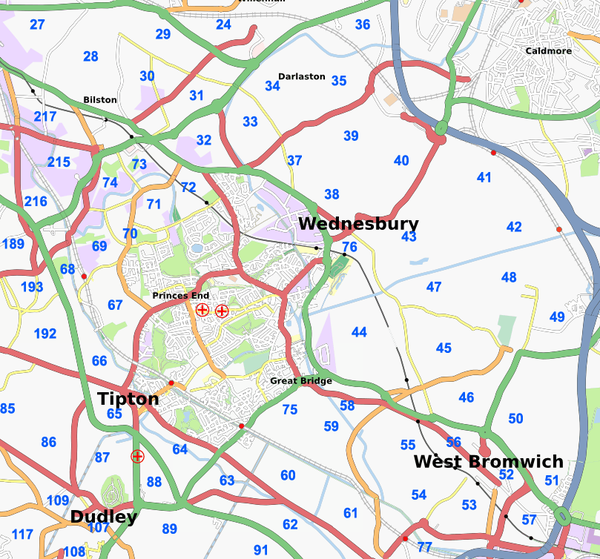 On the weekend of 4th & 5th April 2009, the OpenStreetMap team of volunteers will be adding Sandwell to the global mapping revolution. Contributors to the OpenStreetMap project are meeting at "The Public" in West Bromwich with the aim of completely mapping the streets and other major features of the borough.

Anyone wishing to take part in the mapping weekend are asked to come along to The Public, New Street, West Bromwich, West Midlands, B70 7PG at 10:00am on Saturday 4th (and/or Sunday 5th) to collect GPS mapping units before going their separate ways to map the borough for a couple of hours or the rest of the day.

The OSM project was started in 2004 to enable anyone to use maps in creative, productive or unexpected ways. The use of traditional maps is hampered by legal and technical restrictions that severely curtail their use. The OpenStreetMap project aims to create free geographical data, like street maps, that can be used anywhere by anyone. OpenStreetMap contributors, will be driving, cycling, and wandering Sandwell with GPS (Global Positioning System) units recording the routes of as many streets, cycleways and footpaths as possible. The tracks recorded over the weekend will be added to the online OpenStreetMap.org database where anyone in the world with access to the internet can browse, annotate, reference, edit and use the data in any way they want.

Collaborative mapping is a rapidly growing activity and is being driven in part by technology (cheap GPS equipment and online collaboration tools such as OpenStreetMap.org). Our project now has over 100,000 registered users worldwide. What makes such projects stand out is their knowledge production and ownership ethos. Under such open-source models the rights of authorship are decentralised and the knowledge gathered is seen as a common resource that can be distributed and re-used without restriction or licence. This approach has real potential to empower people to create their own knowledge and encourages re-use of cartographic resources in novel and creative ways.

The map data produced over the weekend will contribute to OpenStreetMap.org, the leading project in the open-source mapping field and a major player in the Linked Data arena. Currently, OpenStreetMap has mapped large portions of the country, including the whole of Birmingham which was completed last year. Now it’s the turn of the Black Country!

We hope that an intensive effort to build a map of the whole of the borough in a weekend will inspire others and help to build momentum across the rest of the region and beyond. As an open organisation with no membership requirements, we welcome the participation of anyone, young or old, who will be in West Bromwich on the 4th and/or 5th April. Anyone interested in taking part should contact Andy Robinson (andy at osmfoundation.org) or call +44 777 553 7872

To view the current map or find further information about the OpenStreetMap project please visit our website, http://www.openstreetmap.org

Further details of the weekend mapping event can be found on the project wiki at: http://wiki.openstreetmap.org/wiki/Mappa_Mercia/Black_Country

For more media enquiries, please contact the OSM Foundation secretary Andy Robinson (andy@osmfoundation.org), phone +447775537872. Andy will be in West Bromwich for the event.

OpenStreetMap is a voluntary not-for-profit organisation that anyone, anywhere can join. The goal of OSM is to provide free map data that can be used by anyone. All of our maps are freely available on the internet at www.openstreetmap.org. Why would anyone want to do that? Aren't there are lots of free maps out there? Most of the maps that you come across on the internet or in your home are protected by very stringent copyright laws. These rules stop the maps from being used in unique and unexpected ways, stifling people's creativity and imagination. www.openstreetmap.org

How does OpenStreetMap work?

Anyone with a handheld Global Positioning System receiver can start mapping straight away. You need to set your GPS to record tracks and then go for a walk or for a bike ride or a drive creating a paper trail on the GPS unit every second. Walk around some streets in your neighbourhood, making some notes about the street names and any one way streets or roundabouts that you find. When you get home, plug your GPS into your computer and upload the tracks that you recorded onto the OSM website. In under an hour your tracks will appear on the website. You can then use the online tools to map roads and street names that anyone in the world will be able to see.

Anyone with access to a GPS unit and a computer with an internet connection can join in. Even if you don't have a GPS, you can see what maps have been made of your area and improve them. Add street names and points of interest and make the maps even more useful.

GPS stands for Global Positioning System. The system is made up of around 24 satellites that are constantly orbiting the earth, transmitting information about their position and time. The information they transmit is a type of radio wave, and can be picked up and understood by handheld GPS units or Satellite Navigation systems in cars. By comparing the signals from at least four satellites it is possible for a GPS unit to work out its position anywhere on the earth to within 5 to 10m. GPS units are not tracking devices. They only have receivers not transmitters. It is not possible for someone to track you if you are using a GPS receiver.