Project to map risks and environmental problems in the city of Tulum with communities in articulation with the municipal government of Tulum and HOT, to enrich local plans and risk atlas. It is operated by Geoid.mx, OSM Mexico's mapping consultancy.

Co.Mapper Tulum is a project based on the "Open Cities" methodology. It seeks to catalyze the creation, management and use of open data for urban planning and resilience of the municipality with the help of local government, civil organizations and universities. The results will be a knowledge and information base for the development of public policies and a project that supports the elaboration of the Municipal Climate Action Plan - PACMUN and the Risk Atlas.

High quality open spatial data will be created and published in OpenStreetMap on the built environment, critical infrastructure and natural hazard risks in the municipality of Tulum. Local capacity and institutional development will be enhanced through the creation of mapping data. Specific products and/or tools (e.g. visualization tools, atlases, map series or mobile applications) will be developed with the OpenStreetMap map as a base input to assist the municipality of Tulum in utilizing natural disaster risk information.

The students of the Geography faculty of UAEMEX-Toluca, are mapping the transportation of their campus and integrating the data to OSM, under the advice of Trufi.org

Unmapped places: Leave no one behind 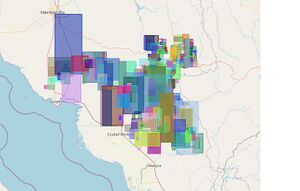 Through Maproulette projects, or by manually tracing the network of roads, paths, village streets, hamlets and isolated inhabited places, contributors map missing areas on the map, with the aim of developing the map in their most lagging territories. The existence of data on the map offers different institutional and social actors the possibility of benefiting isolated populations in the territory.

Attention is placed in particular where the map is most incomplete: in the south and northwest in the States of Sonora, Chiapas, Oaxaca, Guerrero, among others.

The mappings are tagged (not systematically) with #unmappedplaces, #maproulette if they have used this tool.

Kaart contributors actively participate in mapping missing areas on the map in order to complete these regions as much as possible, without being the only organization or group of people interested in this topic.

Kaart conducts ground surveys for improvements to OSM data. A list of editors can be found on the Kaart wiki page.

See Potential Datasources#Mexico and information under "Federal Highways" in this article.

There is an ongoing discussion about the most suitable way to name streets in Mexico.

This exchange has been documented through different channels:

More recently, a virtual meeting was held on December 15, 2020 to provide the community with some context on the main arguments and the optimal way to reach a collective decision on this issue.

It was agreed that the different proposals for the new street tagging system for Mexico will be gathered here in the wiki. As stated in the meeting minutes, the deadline to submit proposals is January 10, 2020. Afterwards, the proposals will be shared widely through the different communication channels for the OSM Community in Mexico. The voting of the proposals will be made explicitly through the wiki by adding the usernames that support the respective proposal at the end of each page. The voting was initially closed on January 31st, 2021 but extended with agreement to Febuary 15th. The proposal 1 gathered the higher number of votes.