The New Forest is an attractive area of southern England to the south west of the city of Southampton, best known for its free-roaming ponies and cattle, its large tracts of old woodland (particularly nice in the autumn!) and open heathland with wide views of the surrounding countryside. Access is almost unrestricted - you can walk on almost every path you can see - yet existing maps generally lack detail. That makes it an ideal area for the OSM treatment!

OSM map centred on Brockenhurst, one of the main centres here.

The second New Forest mapping weekend was the weekend of November 4th/5th 2006.

With the New Forest being a countryside area with most routes designed for walkers, cyclists or horse-riders, this will be primarily an off-road event. The aim over the two weekends is to attempt to complete mapping of all the significant pathways in the Forest. The Forest contains a number of designated cycle routes (typically gravel paths) plus a larger number of paths open to walkers and horse-riders. The September event will aim to focus rather more on the open and semi-open areas (as tree cover is something of a problem for the more densely wooded areas, though in my experience not as much as one would expect) whilst the proposed November event will focus on the wooded areas, which hopefully, with the leaves turning, will be particularly aesthetically appealing at that time of year.

All that said, there will be an important role for car-drivers, namely to complete mapping of the main towns and villages of the Forest and its surroundings such as Brockenhurst, Hythe, New Milton, Fordingbridge, Ringwood, etc. Some places such as Lymington and Lyndhurst are already complete.

There is now a GPS base map of the existing coverage, suitable for Garmin devices which can display background GPS maps (e.g. Etrex Legend), available for download. This will replace the standard background map on your GPS with one created from OSM data, and should be useful as a navigation aid. It should also enable you to easily work out which paths are not done yet.

For details on how to use the .mp and/or .img file, see GPS Maps From OSM Data

Standard disclaimer: USE THESE AT YOUR OWN RISK! 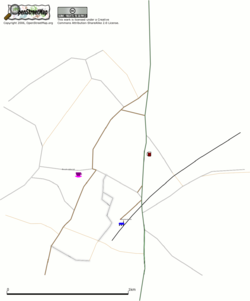 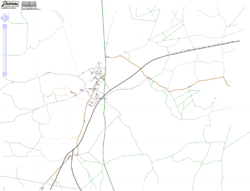 5pm onwards - Idea will be to meet at one of the Brockenhurst pubs at the end of the day, namely the Rose and Crown (shown as pint glass, lat=50.82008 lon=-1.57172) on the A337 north of the station from 5pm. I don't own a laptop, so it would be very useful if someone would bring along a laptop with JOSM and gpsbabel installed. Internet connection won't be essential; the idea is we do the sort of thing we did at Bath and the IoW and build up a "pretty map" of people's GPS logs.

Depending on what people want to do, we may then adjourn to another venue to eat, like we did at Bath.

The image below divides the Forest into 26 zones, A to Z. Note that these are the open countryside areas; there are also the towns and villages such as Brockenhurst, Lyndhurst and New Milton to do. The zones are ringed in three colours: 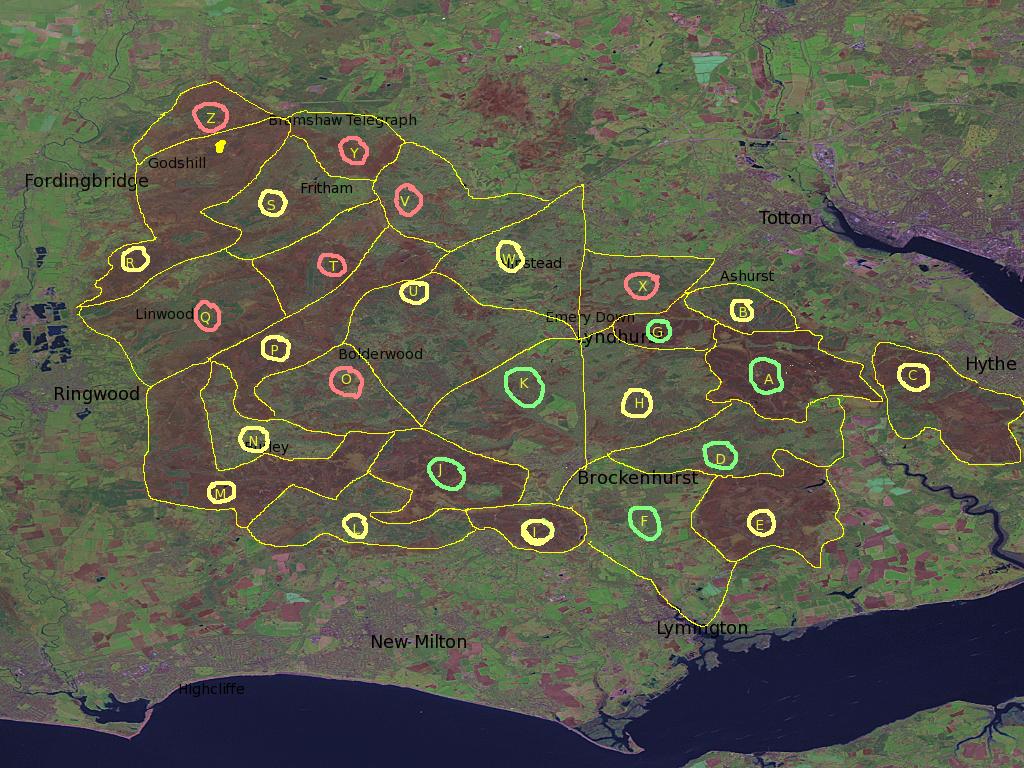 You need to arrange it yourself but I (Nick W) can sleep up to 3 people on my floor on any/all of Friday, Saturday and Sunday night. Please let me know (nick@hogweed.org). I already have one person with a possible yes for Saturday night.

The New Forest is probably within range of places like London, Brighton, Reading and even Oxford to come down just for the day.

What's been done so far

At an estimate, around 25-33% of all the paths in the Forest have been done. Some roads in Lyndhurst, Brockenhurst, Sway and Hythe have been done. In the past week, Lymington appears to have been more-or-less completely mapped.

Please sign up if you can do the second weekend.

Freemap map centred on Brockenhurst (based on live OSM database but non-slippy).

Existing OSM slippy map centred on Brockenhurst, one of the main centres .