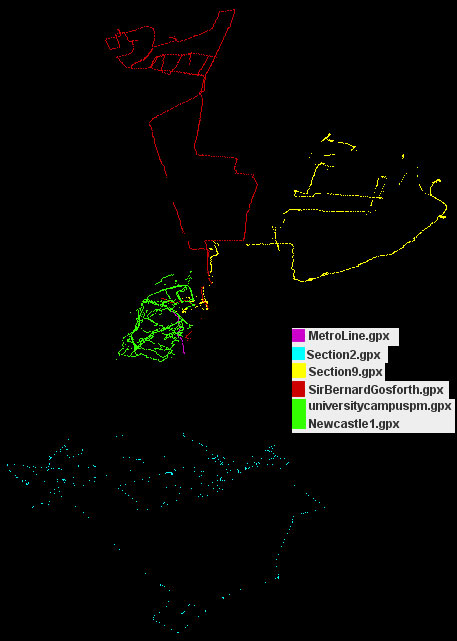 screenshot of JOSM showing all our traces

This was a mapping party event which took place in Newcastle in December 2007.

On Saturday 8th December, an OpenStreetMap (OSM) mapping party came together in the Cassie Building at Newcastle University. With the aim of collecting as much of the missing street data for the main Newcastle region, there was much to do. The weather forecast also stated heavy rain for the whole of the weekend.

The rain didn’t put everyone off, and the start of the mapping began at around 10am. Starting at the north of the city (Gosforth) and working downwards was the plan. The city had been sectioned into walk able areas with print outs of each section available for the field. This proved to be essential as many new people to OSM turned up and needed any guidance they could get. After an introduction to the project and the equipment, they were sent out manned with the handheld GPS receiver, section map and a quick guide to using the receiver. 6 new mappers in total went out and completed parts of their section. The heavy rain made notes very difficult to read and write but all the tracks were uploaded successfully to the server. 2 OpenStreetMap members also attended, each having there own plans for the day. As a result, parts of Newcastle University have been mapped along with a few of its buildings. One member attempted the metro system, however after all the effort, the track did not show the correct path to allow for accurate mapping. Overall, everyone who took part contributed to OSM. Due to the amount of new mappers and Internet connections, very little data processing occurred at the end of the day but all the data has now been used.

On Sunday, the day followed the same plan as Saturday. However, the concentration was on the south of the city. 6 colleagues collected good data after making some small changes from the Saturday. Each of their sections were completed and uploaded to the server. No OSM members were available on the Sunday. Rain and snow came in the afternoon and the day finished early afternoon.

Every track collected over the weekend was used to add new information for the Newcastle region. No particular region was mapped in great detail or completed but Newcastle is now a better-mapped area than before the weekend.

Thank you to those who contributed.

This schedule is just a proposal, feel free to suggest any ideas. Add them on here or get on the forum thread

I would like to get an area (University Campus/city Centre) done in great detail. I am also looking into mapping the university campus buildings. Apart from that, anything goes.

How to get there

If you are interested in attending to the mapping party, you can sign down here. Please add which day(s) your interested in and what equipment you will bring.