Northern section of the Pan-American Highway 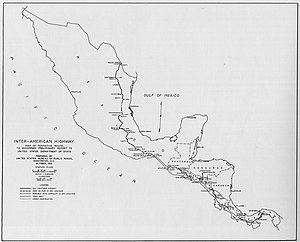 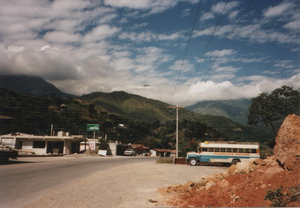 No road in the U.S. or Canada has been officially designated as the Pan-American Highway, and thus the primary road officially starts at the U.S.-Mexico border. The original route began at the border at Nuevo Laredo, Tamaulipas (opposite Laredo, Texas) and went south through Mexico City. Later branches were built to the border at Nogales, Sonora (Nogales, Arizona), Ciudad Juárez, Chihuahua (El Paso, Texas), Piedras Negras, Coahuila (Eagle Pass, Texas), Reynosa, Tamaulipas (Pharr, Texas), and Matamoros, Tamaulipas (Brownsville, Texas).

On the other hand, several roads in the U.S. were locally named after the Pan-American Highway. When the section of Interstate 35 in San Antonio, Texas was built, it was named the Pan Am Expressway, as an extension of the original route from Laredo. Interstate 25 in Albuquerque, New Mexico has been named the Pan-American Freeway, as an extension of the route to El Paso. U.S. Route 85, which goes north from El Paso, is designated the CanAm Highway, which continues into Canada in the province of Saskatchewan, before terminating at La Ronge. The CANAMEX Corridor is also similarly designated throughout the western United States, and continuing into the Canadian province of Alberta.

From Mexico City to the border with Guatemala, the Highway follows Mexican Federal Highway 190. Through the Central American countries, it follows Central American Highway 1, ending at Yaviza, Panama at the edge of the Darién Gap. The road had formerly ended at Cañita, Panama, 110 miles (178 km) north of its current end. United States government funding was particularly significant to complete a high-level bridge over the Panama Canal, during the years when the canal was administered by the United States.

Southern section of the Pan-American Highway

A Vía PanAm shield sign is sometimes found on routes in South American countries associated with the Pan-American Highway.

Ecuador Highway 35 runs the whole length of that country. Peru Highway 1 carries the Pan-American Highway all the way through Peru to the border with Chile.

In Chile, the highway follows Chile Highway 5 south to a point north of Santiago, where the highway splits into two parts, one of which goes through Chilean territory to Quellón on Chiloé Island, after which it continues as the Carretera Austral. The other part goes east along Chile Highway 60, which becomes Argentina National Route 7 at the Argentinian border and continues to Buenos Aires, the end of the main highway. The highway network also continues south of Buenos Aires along Argentina National Route 3 towards the city of Ushuaia and Cape Horn.

One branch, known as the Simón Bolívar Highway, runs from Bogotá (Colombia) to Guiria (Venezuela). It begins by using Colombia Highway 71 all the way to the border with Venezuela. From there it uses Venezuela Highway 1 to Caracas and Venezuela Highway 9 to its end at Guiria.

The highway does not have official segments to Belize, Guyana, Suriname and French Guiana, nor to the assorted islands in the Caribbean region. However, highways from Venezuela link to Brazilian Trans-Amazonian highway that provide a southwest entrance to Guyana, route to the coast, and follow a coastal route through Suriname to French Guiana. Belize was supposedly included in the route at one time, as they switched which side of the road they drive on. As British Honduras, they were the only Central American country to drive on the left side of the road.