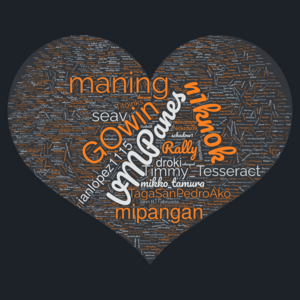 A heart-shaped wordcloud of OSM usernames who mapped at least 1 school in the Philippines, as of 23rd October 2021.

This project is a portmanteau of OSM + Map + Paaralan - to collaboratively map public schools (paaralan) in the Philippines, on OpenStreetMap.

As of 23rd October 2021, the public mapping phase was considered complete. The effort contributed to the 284% growth of mapped schools since 2018, and now stands at 46,638 schools. Most of these schools are mapped as polygons, enriched with attributes provided by the Department of Education (DepEd).

A diary post to document their project wrap-up thoughts was posted here, included a wordcloud of usernames who contributed schools to OSM in the Philppines in the frame to the right of this page.

A second phase is on-going, to map close to 5,000 more schools from the original dataset that were excluded from the mapping project because of data issues (bad, or missing geographic coordinates, is the leading cause, or the remaining "hard" tasks from the micro-tasking challenge.)

In the Philippines, public schools are not only institutions for education but are also

The goal is to improve school location data on OpenStreetMap, using DepEd CY 2013 data (archived here, cleaned-up here) with explicit permission from the agency to integrate them to OSM.

The data released by DepEd includes location data but is not going to be imported directly. Instead they will be validated visually using available imagery. Select attributes that has been tidied-up and available will be added to OSM, as well:

The value for the source tag of the feature is "Department of Education, CY 2012 Public Schools Masterlist."

The following table may not be up to date. Regular updates are found here.

The locations provided in this challenge are based on official data from the provider, but should NOT be considered as authoritative. Most schools are found on (or close enough) to the site but there are many instances where the location is actually the main settlement (town or city) where the site or village is not identifiable.

If there's any conflict between the data from this challenge, and the existing data in OSM - and unless the contributor has additional information to cross-validate it with, the recommended action is to skip the task, and go on to the next one.

Efforts towards this project can be traced back to 2013[1], and its 2019 revival is meant to complement the local community's Tabang-AI initiative, as a follow-up activity for areas completed under said effort. Schools in those completed areas will be prioritized by the micro-tasking manager.

The MapAmore Initiative is leading mapping and validation activities during their MapaTime sessions with regular volunteers from PUP San Juan, and by other contributors in mapping activities they organize.

Use the #OSMaPaaralan hashtag in changeset comments, and social media posts, in addition to your group's own hashtag.

A Mapping Guide and introductory deck for workshops and mapathons is available here, while an earlier documentation of earlier efforts are here.