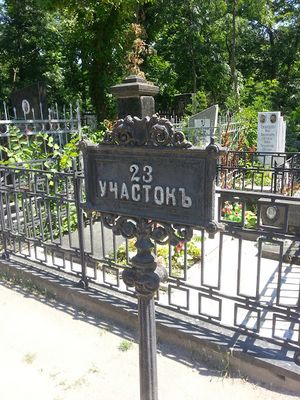 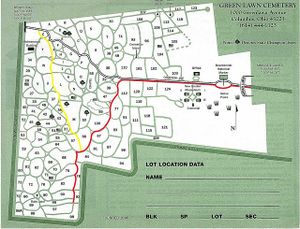 Many cemeteries are very big, so they are divided into sectors (sections, blocks, etc). Each sector has hundreds of graves.

The proposal is to define a tag for mapping (and rendering) cemeteries sections.

Cemetery section usually have an identifier, but can have a dedicated name.

If you want to visit a cemetery, you would be astonished by the cemetery size and you should have a detailed map, at least at the sector level.

Dotted line with text in the middle of polygon. Text appears at zoom levels starting from 16.

Please use the discussion page.

I would recommend subclass-keys, which are used within the area tagged with landuse=cemetery
Just my thoughts. Maybe it would be better to go back to RFC for some time. --Imagic (talk) 13:22, 16 July 2014 (UTC)

There were the following comments after RFC:

There was a fair amount of support for this proposal as is. I don't know how to proceed. Should we organize voting for each of these suggestions? Or voting overall?

Voting for "bad key" (cemetery:xxx=yyy) means we should start from the scratch. While "name" and "points" are trivial.

I do not agree to add "Bad key". This proposal is OK and it is already implemented on many cemeteries. Thus, the vote should be accepted positively, not delayed indefinitely. --Władysław Komorek (talk) 09:16, 23 October 2017 (UTC)