Well, the process of vote is very controversial in OSM project. 20 'yes' on a wiki do not say that a tag will be widely accepted. They are other proposals to tag lanes in details. Only time and contributors can say if this one will become the consensus. But my point was more about the main tags, anyway. --Pieren 15:24, 3 May 2012 (BST)

I fully agree with you, that the proposal process is somehow meaningless. But at least I expect it to "grant the right" to document it in the wiki. If it is used or not... only time will tell. As you see, I also added a note telling not to use the suffix if not needed. --Imagic 15:44, 3 May 2012 (BST)

Could you join us for discussion on Talk:Tag:highway=mini_roundabout#mini roundabouts which are not traversable, please? You probably have a point, we risk starting an edit war. Thanks! --achadwick 16:44, 10 May 2012 (BST)

Actually I don't join the discussion on purpose, because I don't want to start a personal war. Everything important is also told by others so I hope that reason succeeds. Although I'm afraid it will be a tough fight, because NE2 wants his tagging style approved, no matter if it causes problems or not. So I let the community decide. In the meanwhile I'll collect some photos for positive and negative examples of (mini)roundabouts. If the majority then agrees, I'll put those in the wiki. If not... well... the sun is shining outside so I guess I find something else to do ;-) --Imagic 17:13, 10 May 2012 (BST) 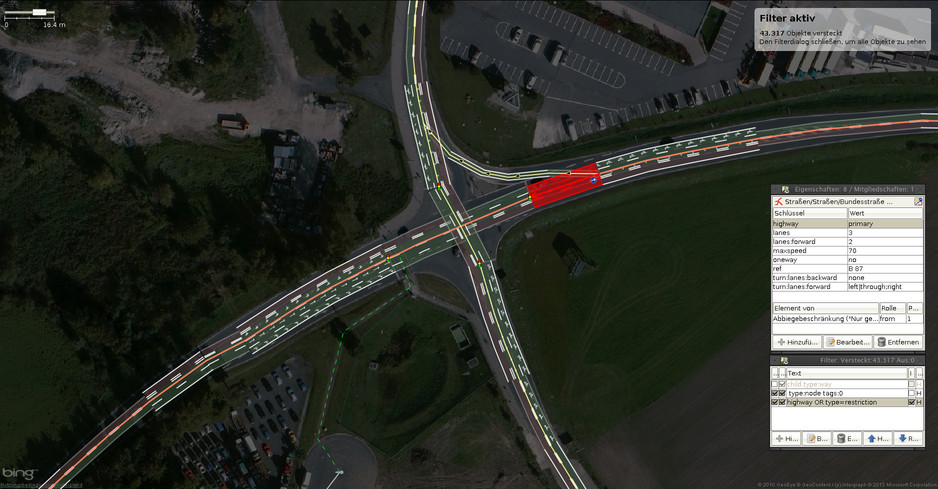 I gave your style a chance to map some intersection of B 87, see the screenshot.

One thing I noticed is what seems to be an artificial shortcoming when placement=transition is used. As I understand it, a junction itself is all about transition, so it would be wrong to visualize lanes framed by bold white lines across one side to another. Using placement=transition on a segment however yields the impossibility to offset lanes, since it is intended to deduct a transition from pre- to post-connected way.

Consider the following two examples, in the first I may use a straight osm way and your style offsets the individual lanes nicely around it, placement=transition is not used. In the second one this will look ugly, since, for the transition segment, the three lanes will render centered around the osm way, instead of being offset like those in the pre-connected-way.

So a properly rendered transition segment will have to take the offset-values of pre- and post-connected ways into account, not just the in- or decrease of lane number count. Currently, if there are transition segments in between, the feature to offset lanes in a segment pre or post to the transition one, seems useless, since it does not connect well, visually. If there is a way to inherit the offset value from e.g. the pre-connected segment, the visual output might be more useful, I guess. Just a suggestion, though. Thanks for the work you put in already. --Cmuelle8 (talk) 16:20, 14 March 2013 (UTC)

It is documented that the value transition is not supported by the style. This kind of computation can (currently) not be done within a JOSM style. The examples on the proposal page should make it clear what has to be done to properly support transition.
I was thinking for some optional(!) extra parameters for transition, something like transition(right_of:1,middle_of:2) but this makes tagging more complex (never a good idea), doesn't solve all problems and also can not be rendered within a style correctly. --Imagic (talk) 09:13, 26 March 2013 (UTC)

I can understand that placement=transition is too difficult to compute correctly, but what about supporting placement:start and placement:end? I could easily get the desired effect with those. StephenTX (talk) 16:29, 5 June 2017 (UTC)

change:lanes on not oneway roads

In the change:lanes proposal it says, that it is allowed to use change:lanes="no|no" for a road with two lanes (one for each direction), where all lane changes are forbidden. This seems not to be supported by your JOSM style.

Until now I used change:lanes:forward=no and change:lanes:backward=no instead, but because change:lanes="no|no" is easier and faster to tag, I ask you to add support for this version as well. Thank You. --Mapper999 (talk) 15:34, 4 February 2014 (UTC)

I would like to support this as I also prefer the short variant, but up to now I can't see how to do that in a style. The processing capabilities of a style are very, very limited. --Imagic (talk) 06:41, 5 February 2014 (UTC)
On the other hand: why not? If I restrict this to the simple case change:lanes=no|no it is easily done! I added it to the style, but currently I can not update the online version, because I already added some new code, which relies on the latest version of JOSM (6808 or newer). I'll have to wait with the update until the next tested-version of JOSM is released. If you want to test the style in the meantime I can send it to you. Thanks for your feedback! --Imagic (talk) 07:12, 5 February 2014 (UTC)

Yes, I added it yesterday later on to the online version also. The necessary code is short and isolated therefore it was quite easy to extract it from my working version. However I did not much testing, so please let me know if you encounter any problems. Thanks. --Imagic (talk) 07:50, 6 February 2014 (UTC)

Well known: item 5 of "Known limitations/bugs". In my offline version this is already fixed, but it needs a "latest" build of JOSM and therefore I will release it in a few weeks. --Imagic (talk) 14:46, 22 February 2014 (UTC)

Great. Thank you! I looked at the few places where I found the bug and it looks good now.

Thanks for testing and your feedback.

Yes, it is wanted, otherwise I thought it would be too confusing. The support for destination_sign is just a quick and dirty hack.

Is it possible to show more than one relation on the same way and maybe the direction of the relation, or is this a technical limitation of josm? --Mapper999 (talk) 19:38, 4 April 2014 (UTC)

Would you mind handling destination:streets exactly the same way you handle the destination tag? I've been advised that freeway ramps leading to streets should be tagged with destination:street and not destination (see http://wiki.openstreetmap.org/wiki/Talk:Exit_Info#Simpler_Exits). Zian (talk) 08:54, 12 November 2015 (UTC)

Thanks for the JOSM lanes style, I'm interested in seeing shoulder=* showing up somehow... I wasn't sure if I could submit a merge request somehow? Aharvey (talk) 06:37, 26 September 2019 (UTC)

> Although I don't see a reason why this should only be used for named junctions. If - for any reason - one wants to group together all the elements of a junction, why not use an area with junction=junction_area without any additional tag?

The usage of the complex tagging scheme (areas) may also be useful without a name. Think of a routing/turn-to-turn navigation engige that can give instructions like “at the second crossroad turn to the right” or “at the fourth traffic signal turn to the left”.

Have you tried your links? Have a look at the old (and current) version here: old version with correct links
And now have a look at your version here: broken links
For example the first link: instead of one link to change:lanes=* you now have two links, one to change=* and one to lanes=*. The second one has nothing to do with change:lanes. --Imagic (talk) 15:26, 11 January 2015 (UTC)

They work exactly the way they are meant to work. As I suspected, the issue you see is about the current lack of compatibility between the key lanes=* and change:lanes=*. Have you tried the link I created in the beginning of this section? (hint: it's different than the one I put in the change:lanes page) --Jgpacker (talk) 15:53, 11 January 2015 (UTC)

Yes, I already understood this before. Let me rephrase this. How about making the links like this?: change:lanes:backward=*, which is a more informative version than the way it is right now. --Jgpacker (talk) 17:20, 11 January 2015 (UTC)

Many thanks for this style.

Would it be possible to duplicate the code for psv / bicycle designated rendering (ie: motorcycle:lanes:forward=designated|yes?

It appears your Lanes and Road Attributes mappaint style does not correctly support imperial units, such as width=30', as documented in Key:width. What renders with such usage is a tiny road segment of small width.

I am mapping cycleways here in the US, and in my area the predominant style is "cycleway=lane" rather than "cycleway=track". Looking at TagInfo, both are prevalent, and "lane" is more common (this holds for "cycleway:left" as well).

Could you add support for "lane" to the attributes? I made these changes in testing it myself, they are perhaps verbose but they worked: 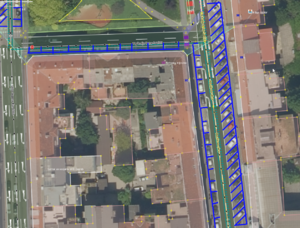 Hello! Thank you very much for writing the Lanes and road attributes JOSM map style, it has been a great help in mapping street lanes in my city! Are you still maintaining this style? Might I make a suggestion: to add support for parking:lane=*. I think it wouldn't have problems fitting with satellite imagery, since just as multilane road lane widths are roughly 2.5-3 m the world over, parking spaces everywhere seem to be roughly in the vicinity of 5 x 2 m. It would look much better than the current parking lanes map style, which is poorly visible in the mass of lines and colors surrounding the way's line when Lanes and road attributes map style is enabled. I have added a mockup of how the style might look. Looking forward to hearing from you! Rostaman (talk) 03:04, 13 September 2020 (UTC)