This proposal calls for a way to tag two-way streets that are centrally divided in some fairly minor way (painted traffic island, median strip, barrier).

Note: This proposal was originally created by Vovanium. It has been substantially rewritten, with some parts removed, by Stevage.

This tagging scheme is applicable to roads, which:

Stevage: It is particularly suited to minor roads with a median strip, for which mapping as two separate roads is inappropriate, and mapping as one road lacks information.

Vovanium: It may be mostly effective on large, long ways having many curves and adjoints (like Moscow MKAD Ring Road) and this was primary motivation for writing such proposal.

This proposal is not applicable to:

There are some grey areas for discussion:

This proposal does not invalidate any of currently used schemes, so nothing serious that lots of ways are already drawn. They may stay as done. But there's lots of mapping and this proposal may help a much. 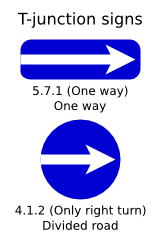 Different signs used at T-junctions with divided road and one way (even if it have opposite part parallel). Sign numbers corresponding to russian driving rules.

There are many areas where a street is momentarily separated. This is a useful landmark to render, and may have consequences for routing, but the current options are very limiting: either one way (with no indication of separation), or ways, with no indication that they're really one street.

The main benefits are thus:

How a divided road might be rendered. From left to right, barrier ("physical"), median, median, line ("legal"). Mocked up using Halcyon. Click for the MapCSS code.

Incorporate Proposed features/Divider to this proposal, so type of divider appear as:

Also this tag should be applied to junctions where an u turn is allowed.

There was also 'divided=*' form proposed but I decided to refuse it because divider=* is already used in mapping, so it would be better to just 'legalize' its using.

By default, when a divided way has a junction with a non-divided way, the division is unbroken. That is, when A-X-B (with divider=barrier) crosses C-X-D. Use divider=u_turn to allow this.

When two divided roads meet at a junction:

This tag has a few, fairly obvious implications for routing. Each side of the divider is treated as a one way street.

Junction
There are two types of juntions: adjoint (which have divider unbroken), and common type junction (on which divider breaks).
Restrictions on junctions may be implied from drive side and side on which other ways adjoin. But because those data acquiring may be difficult, especially in autorouting software, it is encouraged to set driving restrictions explicitly by using adjoint (see below) and/or restriction relations.
Assuming a left-drive country:
To be discussed: there may be uturn and adjoint way at the same node, but because of lanes u_turn cannot be used for driving from/to adjoining way, so such implication may be unacceptable, better use junction=yes.
In case of adjoint vehicles may not drive from one adjoining way to another, only from main (divided) way to adjoining and from adjoining to main.

Other turn restrictions apply as usual. Restriction relations may be used to fine tune routing. So if you dislike divided:forward/divided:backward tags, you may set restriction on uturn gap to make it unidirectional

For adjoint ways a relation is proposed. This gives a way to unambigous routing. Relation defines divded road sides as 'forward' side, and 'backward' side. They correspond to left and right side according to drive side (as stated in country or local laws and rules). So:

Also adjoint relation is good for multilevel crossings with links and ramps.

This relation replaces common restriction by more obvious and simpler method, also there's no more need to cut a way to pieces at every adjoint.

In general routing of adjoints should the same as if a way is splitted to two one-ways, in forward and backward directions, and adjoining way is connected to one of them (according to its role). 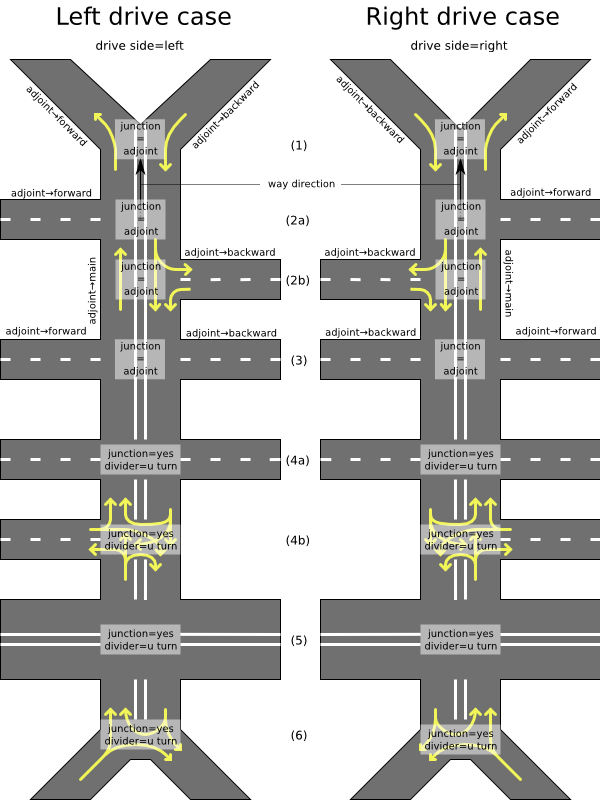 All the routing rules are stated above. This section just explains how they are applied.

There are two cases (case b shown on the picture):

(2a) When adjoint is at 'forward' side

(2b) When adjoint is at 'backward' side

(3) Two adjoining ways from both sides

(4) Non-divided and divided way crossed in a junction

Properties that affect only one direction

All already known road properties may be applied on individual side of separated road by adding suffixes ":forward" and ":backward" to tag name. At least this whould be applicable to physical, structural characteristics (width, no. of lanes), legal restrictions (maxspeed and others). E. g. maxspeed:forward=100 tells us maximum speed is 100 km/h when travelling toward end of way.

There are also some propositions on lane mapping, which may be useful:

Good tags to use with

These tags are listed in this proposal just for information. No changes in their meaning are proposed here.

There are some alternative opinions on how things should be. This section is for discussion.

Properties that affect only one direction

If the two directions have different properties (different speed limits, numbers of lanes, a speed hump), they should be modelled separately. If there is a need to allow this within a single divided road, this can be discussed when that need arises.

Many people call attention to that way direction may be unintentionally changed so routing will become wrong. IMHO this is not a problem at all because we already use way direction in many places (one-ways, barriers, etc.) so everyone (and mapping software) should already be aware about way direction and do not do such things without care.

As a 'patch' adjoint relation member 'direction' may be added which contains last node of way.

Also drive_side=right and drive_side=left may also be proposed for 'redundant encoding with error detection' of routing rules.