In some cases one can be tempted to tag those overhead structures that is built over roads. The ones I am thinking of are usually built to hold road signs of different kind, often to give directions on different lanes of the road. There are also some built to hold traffic surveillance cameras or other sensors, e.g. in way-toll systems. 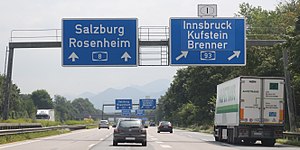 They are not an unusual sight in rail yards either

The word gantry in english seem to mean any mechanical structure with the legs/pillars fixed connected to the overhead beam.

maxheight:physical=* could be a good tag to combine with if the clearance under the gantry is known.

Map a way as long as the gantry with nodes on the roads or rails it crosses. The first and last node should be where the foundations of the gantry are. Tag the way with "gantry". If "clearance" is to be added it can be tagged on the way or directly on the shared highway-nodes.

To the gantry one can tag different features that are attached to it, for instance man_made=surveillance, or road signs.

Other attributes that seem plausible:

Some could complain about using such special tagging and instead propose more genral schemes.

One such approach would be to see it as a piece of roadside infrastructure and make one tag for things like road signs, ditches, fences, barriers, street lighting and such

Another approach would be to see it as one of many kind of overhead stuctures that limits the clearance for vehicles. that would join this with portals, arches, passages through houses, roof cover of petrol stations and in the long run also bridges and tunnels. Just as the tagging of sturdy things like towers are different than tagging of the masts, one could make the same difference between big overhead things like buildings, bridges and roofs and only try to map all gantry-like constructs.