I live in Kungsladugård, Gothenburg. No GPS

I have recently got a permission from the swedish government administration, Lantmäteriet, to save OSM-data on my computer and to keep a database over Gothenburg and environs. (Databases of landscape information need a permission in Sweden)

I am finally taking a serious step to make my own maps in.svg-format. Have downloaded JOSM, Meerkator and Maperitive. Oh, do I like Maperitive!! When I have mastered the tools, I will apply permission to upload them to swedish wikipedia. (Detailed maps have to be scrutinized before published in Sweden)

User:Johan Jönsson/Tags I use is a page with my own definitions on some tags I use. It is used for the project to achieve a floaty cloud Tagwatch on steroids. http://trac.openstreetmap.org/browser/applications/utils/tagstat could be the start of this.

leisure=park apart from the wiki-definition of rather large city-parks I also use it for small public green areas in the city with both kept lawns and some bushes or trees; may have flower plantation, benches, public art. Does not have to be big, e.g. way:19955349. (At first I used village_green but I don´t really know what that is.)

operator=* combined with amenity=place_of_worship Description: Using the operator-key to name the parish, "sv:församling", that runs the church.

According to Good practice, self-invented tags should be published somewhere. So here is my list.

A campanile is a free standing bell tower, typically near a church. wikipedia:Campanile. Instead of adding yet another man_made=*-tag, I think the use of the building=*-tag or maybe a specialization of man_made=tower would be suitable. Later additions to the wiki shows man_made=campanile and man_made=tower + tower:type=bell_tower

In some cases one can be tempted to tag those overhead structures that is built over roads. The ones I am thinking of are usually built to hold road signs of different kind, often to give directions on different lanes of the road. There are also some built to hold traffic surveillance cameras or other sensors, e.g. in way-toll systems. 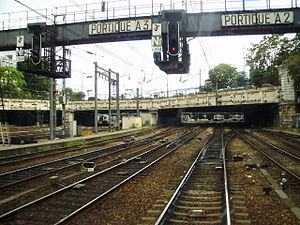 They are not an unusual sight in rail yards either

The word gantry in english seem to mean any mechanical structure with the legs/pillars fixed connected to the overhead beam.

Tagged as man_made=gantry maxheight:physical=* could be a good tag to combine with if the clearance under the gantry is known.

Map a way as long as the gantry with nodes on the roads or rails it crosses. The first and last node should be where the foundations of the gantry are. Tag the way with "gantry". If "clearance" is to be added it can be tagged on the way or directly on the shared highway-nodes.

To the gantry one can tag different features that are attached to it, for instance man_made=surveillance, or road signs.

Other attributes that seem plausible:

Some could complain about using such special tagging and instead propose more genral schemes.

One such approach would be to see it as a piece of roadside infrastructure and make one tag for things like road signs, ditches, fences, barriers, street lighting and such

Another approach would be to see it as one of many kind of overhead stuctures that limits the clearance for vehicles. that would join this with portals, arches, passages through houses, roof cover of petrol stations and in the long run also bridges and tunnels. Just as the tagging of sturdy things like towers are different than tagging of the masts, one could make the same difference between big overhead things like buildings, bridges and roofs and only try to map all gantry-like constructs.

The word gantry in english seem to mean any mechanical structure with the legs/pillars fixed connected to the overhead beam. This tag is only for wikipedia:gantry_(road_sign). If one attach a hoist underneath a gantry it becomes a gantry crane, they can be made humungously big. All sizes and forms of cranes should be tagged with man_made=crane.

I also tried to use a relation to group three buildings making up "Dahlheimers hus" in Gothenburg. (although i probably would have been better of just tagging the area of the three buildings)/Johan Jönsson 15:59, 20 September 2009 (UTC)