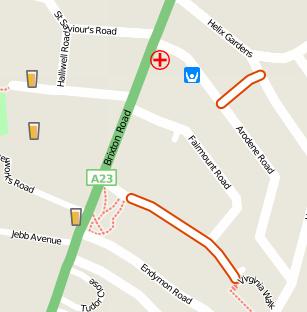 Tools like the NoName layer give an indication of mapping progress, by highlighting streets where we haven't gathered the name yet. But what if a street really doesn't have a name?

There are some features (eg roads) that nearly always have a certain tag (eg name=*). The absence of those tags usually means the mapping is incomplete. However sometimes roads don't have a name. OpenStreetMap is an evolving project and is not finished yet, so there needs to be a way to record that the absence of a name tag is not a flaw in OpenStreetMap.

There is no clear consensus on how to map streets with no name among the OpenStreetMap project. These tag proposals will help to distinguish unnamed roads because the name was unknown (then just add the tag "name" when you know it) with roads that have really and officially no name at all.

There are a few options for recording this. Please edit this section to flesh out the options and add your own options, please use the talk page for discussion. First we need to decide which option fits best and then propose that for voting.

Adds a new top level tag unsigned=*, with two possible boolean values. unsigned=yes, which means that this feature (way) does not have a name sign. There is minimal useful case for unsigned=no, i.e. that there is signage present. However, even if the name=* tag is present, then unsigned=yes may be useful - if the name has been determined other than from a sign, e.g. local knowledge, NPE, etc.

Adds a new top level tag noname=*, with one possible value, noname=yes, which means that this feature does not have a name. There is no useful case for noname=no, since if the name=* tag is present, then noname=no is implied. If a feature has a name=* and noname=yes, then the name tag takes preference and the feature has a name (specified by the name tag). The noname=yes tag should be regarded as a bug in this case and can be removed.

Adds a new top level tag unnamed=*, with one possible value, unnamed=yes, which means that this feature does not have a name. There is no useful case for unnamed=no, since if the name=* tag is present, then unnamed=no is implied. If a feature has a name=* and unnamed=yes, then the name tag takes preference and the feature has a name (specified by the name tag). The unnamed=yes tag should be regarded as a bug and can be removed.

This can be used by any top level tag, to mean that this tag is normally present for this feature, but in this special case is not defined. Example:

Reserve a special value for the name tag to represent that there is no name for the tag, eg name=__none__.

A list of tests which will fail on this object and should therefore not run to prevent false alarms. This provides a general solution to problems arising from quality assurance tests which might fail on some objects, because they are somehow exceptional. The test_ignore-tag would provide a way of specifying that someone checked that it is okay for a particular test to fail (i.e. the every-street-needs-a-name-test).

Apart from introducing the new tag it would be advisable to keep a list of tests and test names on the wiki.

As described here : Proposed_features/Internal quality it includes general meta-informations on the data in the validate: namespace. and propose as a solution :

This value is already used on a noname renderer alternative : Yet_another_validation_tool_for_osm_data