Formalize the use of a dedicated tag for stopways on aerodrome infrastructure.

Stopways are a distinct and easily recognizable part of the built structures at an airport. The US Federal Aviation Administration (FAA) defines a stopway as "An area beyond the takeoff runway no less wide than the runway and centered upon the extended centerline of the runway, able to support the airplane during an aborted takeoff, without causing structural damage to the airplane, and designated by the airport authorities for use in decelerating the airplane during an aborted takeoff." (AIM[1] PCG S-7) Furthermore the FAA defines a runway as "A defined rectangular area on a land airport prepared for the landing and takeoff run of aircraft along its length." (AIM PCG R-6) That fairly clearly excludes stopways from the runway.

NB: A related term often interchangeably used in Northern America is blast pad which contains stopway area and surrounding area prepared against blast erosion in order to protect a landing aeroplane from the danger of an exposed edge. Not all of the blast pad area is suitable to support an aircraft rolling on it, only the stopway part of it does. See also Runway#Sections on Wikipedia.

Stopways are often marked with a distinct yellow chevron marking with the tip of the chevron pointing to the start/threshold of the runway it belongs to. On older runways they are sometimes unmarked sections behind the runway threshold.

A way tagged as stopway shown in JOSM on the backdrop of Bing satellite imagery at Miami airport. 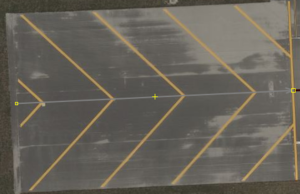 Way rendered with width and opacity between runways and taxiways. Potentially even mimicking the chevron pattern of stopways.

Aeroways description page - To be updated in the runway section to reflect the application of this tag.

Discussion started in 2017 from the aeroway=runway discussion page

Current use as reported by taginfo:

There is an alternative tagging scheme in use which uses aeroway=runway+runway=blast_pad. See the taginfo comparison of usage of aeroway=stopway and runway=blast_pad