Formalize the use of a dedicated tag for displaced thresholds on aerodrome infrastructure.

Displaced thresholds are a distinct and easily recognizable part of the built structures at an airport. They are an optional section of runways that can be used for take off but not landing. The US Federal Aviation Administration (FAA) defines displaced thresholds as being "on the runway" (AIM[1] PCG D-3). See also Runway#Sections on Wikipedia.

Displaced thresholds are often marked with a distinct centerline repeated arrow marking with the tip of the arrow pointing to the start/threshold of the runway it belongs to.

A way tagged as displaced threshold shown in JOSM on the backdrop of Bing satellite imagery at JFK airport. 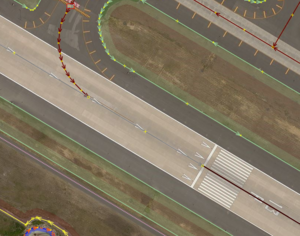 aeroway=runway + runway=displaced_threshold to be tagged on the way positioned along the centerline of the displaced threshold. The direction of the way points towards the runway it belongs to.

Way rendered with same style as aeroway=runway. Bonus would be rendering the repeated arrow pattern of the marking as transparent cutouts.

Aeroways description page - To be updated in the runway section to reflect the application of this tag.

Discussion started in 2017 from the aeroway=runway discussion page

Current use as reported by taginfo:

See the proposal for Proposed features/aeroway=stopway