This proposal describes how to use traffic_signals:turn=* to tag turn signals.

A lot of similarity exists with the existing definition of the :turn suffix (see turn=*).

The proposal also provides a solution for tagging of the information provided by additional signs like "no turn on red".

This information can be used by a navigation system to remind the driver that a separate turn signal exists at the crossing. This can be very helpful for drivers who don't know the area and might not notice the turn signal.

The general syntax of the tag is as follows (fields in square brackets [..] are optional):

This key-part specifies the vehicle category or transportation mode to which the traffic_signal applies, e.g. bicycle, motor_vehicle, foot, agricultural.

Traffic signals are typically direction-dependent. Use forward and backward to indicate in which direction the restriction applies. The value depends on the direction in which the way is drawn in OpenStreetMap. For guidance on how to identify this in your editor, see the description of the terms "forward", "backward", "left", and "right". This key-part can be omitted in the case of a oneway road.

Many values of :turn are re-used with the addition of the value "all", see below.

To tag what is shown by several traffic lights, the vertical line "|" and the semicolon ";" can be used as follows:

Please note that the vertical line "|" does not indicate per lane signals, and the :lanes suffix (see Lanes) is typically not used. (If needed, an extension like traffic_signals:turn:lanes:forward=* would probably be possible, but it's not part of this proposal.)

Please tag only what you can see. Especially rules for turning on red should only be tagged if a relevant sign exists - don't tag the default rule that is provided by local law.

Traffic signal only for traffic that turns left 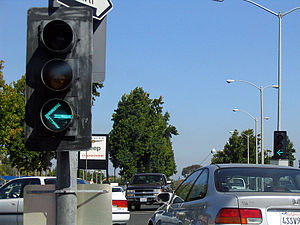 Normal traffic signal for all traffic 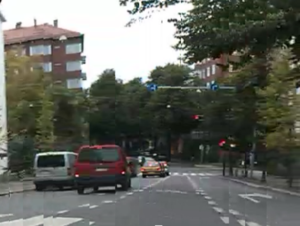 Traffic signal only applies to a specific transportation mode

You can use the applicable suffix for the transportation mode, e.g. if there is a bicycle lane on the highway and a specific traffic signal exists only for bicycles that turn right then you can use the :bicycle suffix to create the tag traffic_signals:turn:bicycle:forward=right.

Right turn on red for bicycles

The sign shown in the image has only been proposed and does not (yet?) exist on public roads in Germany. However, similar signs may exist in other countries. Such signs could be tagged by first tagging the general traffic signals and then adding the specific traffic signals that apply for bicycles, e.g. traffic_signals:turn:bicycle:forward=all|right_on_red.

This proposal only applies to nodes.

The information captured by this proposal is probably too detailed to be shown on a map.

A navigation system might show traffic lights with solid red/yellow/green lights or colored arrows as appropriate.