QGIS (previously also known as Quantum GIS) is a free (GNU GPL v2) and open source GIS application enabling the user to visualize, manage, edit, analyse data, and compose printable maps. It runs on Linux, Unix, Mac OSX, Windows and Android and can be downloaded free of charge from qgis.org.

In QGIS version 3, there are built-in features to use raster and vector data from OpenStreetMap. There is no built-in possibility to upload changes back to a OpenStreetMap server directly from QGIS. For this purpose, please use one of the Editors.

The XYZ Tiles source section includes OpenStreetMap as a standard feature. Right clicking on that reveals an option to add that as a layer.

Note that QGIS caches the raster maps. Changes made on OpenStreetMap will not show up until the QGIS cache is cleared. The Clear cache button is hidden in the Settings -> Options... -> Network form.

Vector data can be loaded into QGIS from an OSM file without any extra add-ins. Use Layer -> Add Layer -> Add Vector Layer menu and specify an OSM file to be imported into a QGIS project. An OSM file can be exported from OpenStreetMap in a number different ways. For example, use the Export button at https://www.openstreetmap.org/

One of tutorials is available at Searching and Downloading OpenStreetMap Data (QGIS3)¶.

QGIS 2.0 integrates OpenStreetMap import as a core functionality. To get OSM data, use the "Vector → Openstreetmap" menu:

For QGIS older than version 2: The QGIS OSM Plugin lets you load in vector data from OpenStreetMap, and even edit and upload your changes. However, due to a bug related to 64-bit Identifiers, newer data is not read. See the QGIS OSM Plugin page for more info and workarounds.

Shapefiles, PostGIS and other conversion options

There are many ways converting OSM data to other formats which can then be opened within QGIS. In particular note the various options for Shapefiles and PostGIS databases.

See Question:How to get OpenStreetMap as a raster layer in QGIS?

To make OSM layer look smooth make sure you use ESPG:3857 projection and set a scale to start from 1:2257.

You can also import this file to set the scale pyramid for your project:

Styles for OSM data in QGIS

There are an increasing number of QGIS styles pre-prepared and available for Openstreetmap data - for example:

The major features of QGIS include: 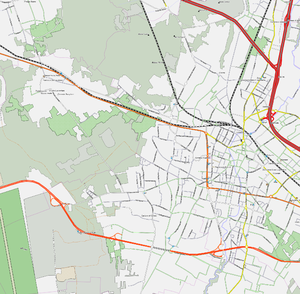 The QGIS wiki provides numerous guides and video tutorials to help users of all abilities. For new users a good place to start is the Introduction to Quantum GIS video. It is also important to have a basic understanding about the #Coordinate Reference System.

Other useful pages to bookmark:

QGIS allows you to to create advanced symbology (similar to Mapnik or Osmarender) in a powerful but very easy way (a few mouse clicks), see examples here [ dead link ] and a detailed video on youtube.

Earth is a three-dimensional body, roughly spherical in shape, yet the vast majority of maps are flat (2-dimesional). A Coordinate Reference System (CRS) defines a method of projecting all or part of the Earth onto a 2D surface. QGIS has support for approximately 2,700 known CRS. Some, such as WGS-84 are global projections, whereas others represent only specific regions.

When working with geo-spatial data it is essential that you are using the correct CRS. If you are lucky the projection will be specified as part of the vector file (for example, ESRI Shapefiles often include projection data in the .prj file), however you will often have to manually select the correct CRS.

To specify the CRS of a vector layer, select the layer and choice Layer->Set CRS of Layer(s).... Each layer can have a different CRS. If this is the case, you will need to convert them to the same CRS in order for them all to display correctly. The easiest way to do this is to use 'on the fly' CRS transformation:

More information can be found in this video tutorial.

Using QGIS to convert between CRS

QGIS can be used to convert between CRS. Open the input layer making sure to select the correct CRS as described above. Use Layer->Save As... to export the layer with a different CRS (you may choice between the "Project" CRS or select a CRS from QGIS's extensive list).

In Sweden multiple government agencies give out data in large shapefiles. These files do not load nicely in JOSM because of their size and/or JOSMs premature shp support.

To filter out part of a shp file in QGIS you can do this:

Here is a video tutorial describing more advanced filtering based on attributes. In this example it would be nice to only have the nature reserves where "BESLSTATUS" = 'Gällande' is true because that means they are in effect (and not just planned). Follow the tutorial in the video to archive this.