Railways in the United Kingdom

United Kingdom Railways is a project to map all the mainline railways in the United Kingdom. There are related projects to map the London Underground, United Kingdom trams, and independent and minor Railways.

Most railway lines are in. 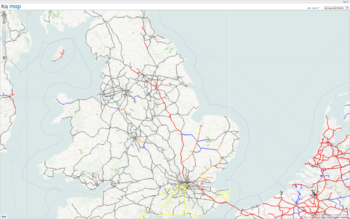 Railway electrification in England and Wales

Railways are shown on most OpenStreetMap mapping layers alongside other information.

All currently operating UK mainline railway stations have been now mapped as nodes, according to a comparison of the list from Wikipedia. There is currently an effort to map the stations in more details, including the platforms and station buildings.

Current operational train services (as distinct from historic services) should all be mapped as relations tagged as type=route and route=train. They should also be tagged as network=National Rail to specify the service is part of the National Rail network. This helps distinguish the more important services and aids sensible display by the OpenStreetBrowser renderer.

For SWR services, use "SW xx" as the ref where xx is the first 2 digits of the "headcode" in the timetable[1], still shown on the class 455 trains.

New Lines (Proposed and Under Construction)

The data can come from GPS traces submitted to OpenStreetMap (try searching the traces page for train, railway or rail), or from NPE Maps or landsat imagery. When tracing from NPE/landsat, do not use copyright sources to figure out if the line is still there or not. Instead, either use local knowledge, or other compatible map sources such as the OS Opendata

Unless otherwise specified, you'll need your GPS to be by the window on these trains to get a good lock.