The ShoHo Mapping party was a Past event weekend of 8/9th September, 2007, to map the ShoHo (Shoreditch and Hoxton) district (map) to the east of Central London. It is one of the trendiest places to be, and be seen, in London. 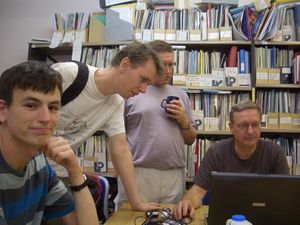 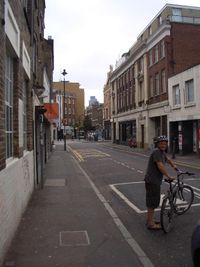 80n outside the Campaign For Better Transport offices

80n, TomH, Harry Wood, Edward, Sygopet, and LastGrape met up, along with a couple of newbies (one of whom disappeared in search of GPS, the other being Leutha), at the Transport 2000 offices on Hoxton Street. Near Old Street Tube station. Transport 2000 renamed themselves and were working on relaunching their website on the same weekend. The new name is "Campaign for better transport" although currently they're still at http://www.transport2000.org.uk/ . One of our aims was to create a new location map for their website.

So far we have lots of written notes, dictaphone recordings, and photos, plus the traces: 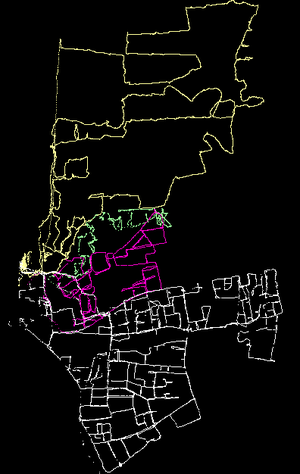 Some of the traces from day 1

In the next few days we'll be entering the data, and hopefully the rendering you see here will suddenly look quite complete (areas to the North West of their offices)

We went to brick lane for a curry afterwards.

LastGrape and a couple of newbies came along at lunch time.

We made some good progress mapping some of the more northerly areas of the cake (plus Firefishy went South to area 7) Below is a rough guess at the kind of areas we managed to survey. 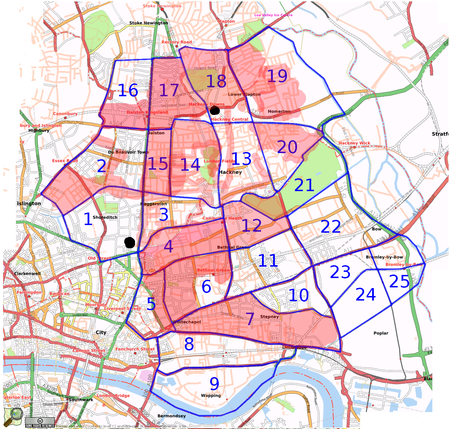 ...but the proof will be in the rendering (once we've entered all the data)

Pembery Tavern was excellent (free wifi, good beers, and a helpful owner who opened the pub at 10a.m. for us) It would make a good base for future mapping parties, if we wanted to conquer the area completely.

Sunday evening Morwen, Harry Wood and Firefishy played a board game with a guy with a ferret. 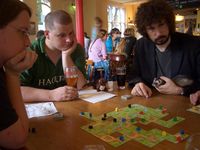 Morwen and Firefishy playing board games with a guy with a ferret
Retrieved from "https://wiki.openstreetmap.org/w/index.php?title=ShoHo_Mapping_Party&oldid=1887581"
Categories: