From OpenStreetMap Wiki
Jump to navigation Jump to search
Tag:boundary=maritime - Other languages

The tag boundary=maritime is used on several kinds of Maritime boundaries over areas of sea claimed by countries under the UN Convention on the Law of the Sea, which are not administrative boundaries. The main use is for mapping the baseline, contiguous zone, and EEZ (exclusive economic zone), distinguished with the tag with border_type=baseline: 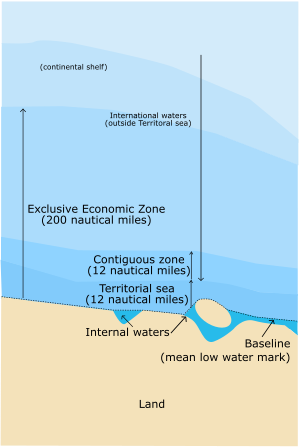 Almost every non-landlocked country has maritime borders, national borders at sea. United Nations Convention on the Law of the Sea establishes that the territorial waters of a country can extend up to 12 nautical miles (22.224 kilometres) from the low-tide mark of the sea. This distance does not apply for all borders of this type: for instance, the English Channel is only 34 km at its narrowest point. In this situation, the national border lies along the midway line of the English Channel.

Maritime borders are frequently not fully closed, notably for the exclusive economic zone or the extension of the continental shelf (due to the absence of international agreement between two or more bordering countries). If some part of the EEZ is missing, the area is implicitly limited by the territorial waters and by the shortest segments joining each ending node of the EEZ to the territorial waters.

The baseline from which the territorial sea is measured is based on the low-water line along the coast. However, the baseline usually cuts in a straight line across the entrance of fjords, estuaries and gulfs, all navigational waters inside the baseline are defined as inshore or protected water. There are also straight baselines and archipelagic baselines which extend far out into the sea. In contrast, the natural=coastline should be placed at mean high water springs (MHWS) - the actual high tide line.

On nodes: (optional)
ref=* - reference of the waypoint.
source=* - should be stated together with ref!

The contiguous zone is a band of water extending from the outer edge of the territorial sea to up to 24 nautical miles (44 km) from the baseline, within which a country can exert limited control.

boundary=administrative - same as land-based administrative boundaries
maritime=yes - to state that this is a maritime border, so it can be rendered correctly/different from land borders
admin_level=2 - since it is a national boundary
border_type=territorial - to distinguish it from borders on land

These ways should also be members of the boundary relation of the country.

The territorial waters line (12 NM zone) should be included in boundary=administrative relations, the same as land borders.

If a country has defined the maritime borders of sub-national entities, this way should be included in boundary relations for these entities.

In the United States, "The 9-nautical-mile Natural Resource Boundary off the Gulf coast of Florida, Texas, and Puerto Rico, and the Three Nautical Mile Line elsewhere remain ... the outer limit ... of the states."

You can conveniently view a maritime zone if you create a Relation:boundary for it: