From OpenStreetMap Wiki
Jump to navigation Jump to search
Tag:sport=billiards - Other languages

This tag can be used for pubs or bars offering the feature of billiards, or with other sport-related tags such as shop=sports.

Since this is a non-physical tag it should always be combined with some other (physical) tags, eg:

If you want to specify the type:

The following variants are not the correct (english) spelling! 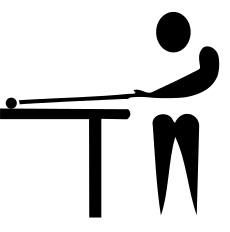