It ought to be possible to correlate the timestamp of the WAV file with the tracklog and show the location of each WAV file in JOSM the way it does for photographs. Clicking on the icon in JOSM could then play the WAV file. 80n 12:37, 24 November 2006 (UTC)

When I'm out mapping I use an old school dictaphone with ordinary cassettes. I say that I turn everytime I do so and know that I synch everything correctly. The problem is that I overwrite my recordings every time I make a new trip (otherwise I'd have to buy new cassettes all the time), so i have no source or evidence that I ever used the dictaphone instead of just looking the street names up on a copyrighted map... I suppose we just have to trust each other, but is there an issue with doing it this way? I don't feel like buying new fancy voice recorders when there's no way to upload any .wav files to OSM anyway... /Grillo 21:30, 3 July 2008 (UTC)

I didn't really get what Spatial Synchronisation is all about. Could someone explain what do you do with the crossing track and the spoken marks? --Driver2 18:33, 6 December 2008 (UTC)

JOSM can cope with a long recording with lots of observations in it, but that in itself has a few problems such as clock drift and a large (mostly empty) file to keep/backup.

There is a solution in Gps Event Sync. You can use the file timestamps from many short recordings to derive a GPX file containing Waypoints at the location of each audio recording. The timestamps from the files can be parsed into the correct format with a simple awk script (for example called 'parse_timestamps.awk'):

And then process the 'events.txt' file with GPS Event Sync

JOSM can display a 'play button' in it's GUI if the additional tag <link>file://path/to/file.wav</link> is included at each waypoint. You can use something like:

I think it might be possible to do what Mungewell suggests above by doing the recordings on a simple Java enabled mobile phone and a bluetooth GPS receiver as shown in the following picture. 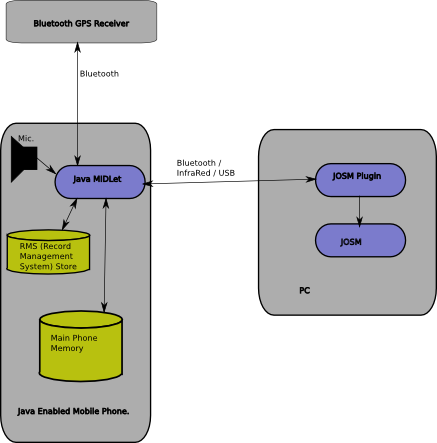 I have had a mess about and I can get a MIDlet to find the location from the GPS, and another to record sounds, but haven't got one stitched together yet to try to record it all so you can get it into JOSM. The main problem is that MIDlets struggle to access the phone memory without lots of annoying boxes to ask the user's permission (unless you pay to 'sign' it...), but I think I should be able to store audio clips in the Record Mangement System (RMS) without those problems. I am surprised no-one has done this before, so is there a major problem with what I am thinking about (like a limit on record size in the RMS?). I'll put something on the main page if I make it work.... I found out that GPSMid pretty much does what I wanted, so have added a section on using GPSMid to the main page instead. --GrahamJones 22:28, 13 April 2009 (UTC)

For recording in environments with high background noise, especially when using the voice-operated relay (VOX) feature of a cassette or digital recorder, consider using a noise canceling boom microphone or a throat microphone. Noise canceling boom microphones are commonly used by aircraft pilots and work quite well in environments with ambient noise so loud that it is difficult to hold a conversation. However, they don't do so well in windy environments, as on a motorcycle, bicycle, open cockpit airplane, convertible car, etc. Wind noise can be mitigated to some degree with an open-cell foam windscreen cover on the microphone, but in severe situations this won't be enough. In such cases, a throat microphone is ideal. It is attached to the user's neck with a strap and picks up vocal cord vibrations by physical contact. Sibilant sounds ("s", "sh", "ch") generally don't come through well, but can be inferred from context and the overall intelligibility is much better.
If someone is willing to do the experimenting and report back to the project with practical experience, this information could be moved to the article page. User8192 19:18, 10 April 2010 (UTC)

I think there are different kinds of timestamps. Perhaps the article should explain that. See this: Talk:Photo_mapping#Distinguishing_the_different_time_stamps. -- SwiftFast (talk) 10:31, 2 May 2017 (UTC)

Since we all have a smartphone nowadays, which basically integrate many mapping means into one device, it would be helpful to have some information on how to set up audio mapping in combination with photo's and gps tracks. I'm currently looking into this for personal use, for Android specifically, but have not found a dictaphone app able to control via the buttons of a headset. I will report back here as soon as I've found a streamlined method. In the meantime, other ideas are welcome offcourse, also for iPhone. Dikkeknodel (talk) 12:53, 27 July 2018 (UTC)