Minor divergences at the end of the ramp (motorway link)

When the exit ramp diverges at the end, would the way tagging apply to both branches? Would this qualify for street:to tagging on the upstream motorway_link?

Isn't the tag highway=motorway_junction the defacto way of tagging highway exits? You should present this page to the tagging mailing list, if you are not doing so already. --Jgpacker (talk) 17:48, 15 June 2015 (UTC)

I think the person to best address that point would be mvexel. I'll bring this discussion to his attention. Skybunny (talk) 17:27, 2 August 2015 (UTC)

I'm not convinced of the :to extension. 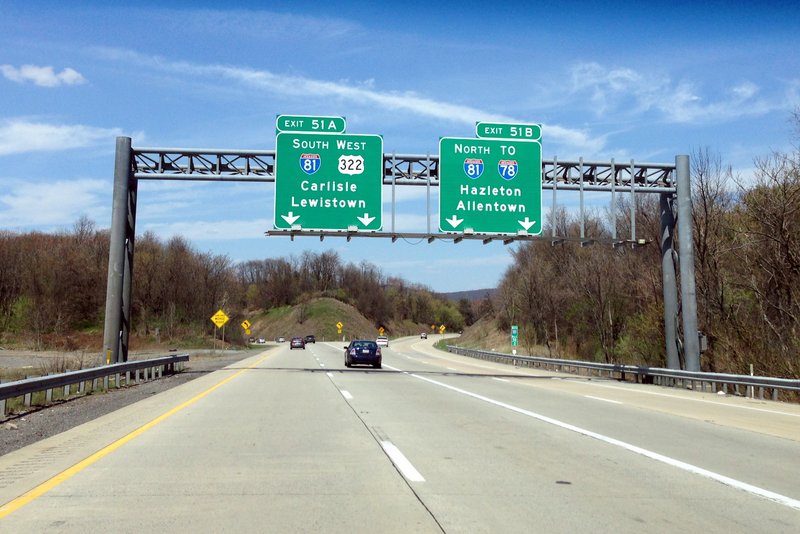 "A/B Split Example" suggests tagging ref=51A-B on the highway=motorway_junction node. This could be confusing, because an exit number in another country may include a hyphen. Instead, we should delimit multiple values according to OSM convention: ref=51A;51B. – Minh Nguyễn (talk, contribs) 17:19, 13 September 2015 (UTC)

We should also mention the ref:left=51A & ref:right=51B option on the front page for the highway=motorway_junction node. That will allow router to know properly which exit number goes to which ramp. See: Proposed features/motorway junction Extension -- rickmastfan67 (talk) 01:30, 16 December 2015 (UTC)

This page is really helpful for complicated exits but when dealing with a much simpler exit where the sign only states the destination street, would it be better to put the name of the street in the destination tag? Zian (talk) 03:24, 15 October 2015 (UTC)

If the the ramp connects directly to the street then is should tagged using destination:street --Duaneg (talk) 18:44, 11 November 2015 (UTC)

I'd argue that for motorway exits whose total sign indication is 'Main Street ->' that 'Main Street' should be tagged on both 'destination' and 'destination:street', or failing that - if only on one - then just on 'destination'. Routing software won't know that it should look for one above another, and an exit's indicated 'street' destination may not match the street that it actually connects with. This is a fairly common occurrence. Skybunny (talk) 21:53, 14 December 2016 (UTC)

In most urban areas in the U.S., guide signage states the street before or instead of a destination. For example, 30735517

By this reasoning, we should also have destination:city=*, destination:suburb=*, destination:neighbourhood=*, and destination:attraction=*. And that doesn't address the question of how to specify that a street should be placed before a city or an attraction before a neighborhood in a list. This is crucial for accurate guidance. By the addr analogy, there would still need to be a destination:full=* by analogy with addr:full=*, since the order varies even more than address formats (sometimes from one exit to another on the same road). Finally, I would caution against making too many assumptions about what's in addr:street=*: for example, "take the exit onto Street1, Street2" may ignore the fact that the ramp leads to a third street towards Street1 and Street2, perhaps a frontage road or some other configuration. Minh Nguyễn (talk, contribs) 15:08, 2 August 2017 (UTC)