From OpenStreetMap Wiki
< Proposed features(Redirected from Key:destination:street)
Jump to navigation Jump to search

Currently the key destination=* describes the direction of the highway by using the name of the city the highway is heading to. Additional sub-keys should be introduced to provide further information like the reference of the road ahead, the country the road is heading to or a special symbol like for an airport.

In order to present accurate and precise instructions, a navigational device needs information about the road it should lead the driver to. The established key destination=* only describes the name of a city or place.

The photo on the right shows a typical signpost on a motorway. Beside the name of major cities it also displays:

Just like the key destination=*, all sub-keys should be put on the first way after the junction. On the way before the junction those keys should (additionally!) only be used if their values are lane-dependent, and then the suffix :lanes has to be added.

All the sub-keys should only be used to specify information that can be seen on signposts, road markings or similar.

The key destination:ref=* should be used to specify the reference of the roads directly ahead as indicated on signposts, road markings or similar. The value of this key should be equal to, or a further qualification of, the value of the key ref=* of these roads.

The key destination:ref:to=* should be used to specify the reference of a major highway ahead, as indicated on signposts, road markings or similar. This is a common practice in the United States on motorway destination signs, see [1]. The value of this key should NOT be equal to the value of the key ref=* of these roads, because a destination:ref:to=*'s reference road will never directly connect to the slip road indicated on the sign; it is provided as a means of navigational assistance to the driver.

The key destination:int_ref=* should be used to specify the international reference of the roads ahead ahead as indicated on signposts, road markings or similar. The value of this key should be equal to the value of the key int_ref=* of these roads.

The key destination:country=* should be used to specify the country a road is leading to. Valid values are usually international licence plate country codes.

The key destination:symbol=* should be used to indicate that a special symbol/icon is present on a signpost, visible as road marking or similar.

In many countries with non-Latin alphabet names are sometimes shown in Latin alphabet additionally. In such case the actual language of the name written in Latin may not be clear. It is recommended to choose the most widely used language in the world, in which the name is written exactly as shown on the signpost; in many cases this will be English (language code: en).

If a signpost contains a street name, use this tag.

If the street is displayed in multiple languages, use a language qualifier as described in the header Consider this example: 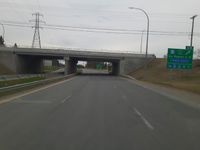 The destination tagging for this signpost would be:

On the Canadian mailing list the destination:street:fr=* was proposed, but destination:street:lang:fr=* fits better to existing tags and avoids ambiguities (Is ':to' a language name or not?). There are still about 200 cases of the first scheme in the database (solely for English and Arabic), while the majority of keys and languages use the ":lang" scheme.

At the time of this proposal the keys destination_ref=* and dest_ref=* have been already used for the purpose of the proposed destination:ref=*. Both keys are not documented (and quite a lot of destination_ref tags are from me). As the usage numbers currently are not too high (about 400-500 each) I still recommend to use the key destination:ref=* instead to introduce a consistent tagging scheme with all the other sub-keys. Please use the Discussion page to comment on this.

Update un Dec 14th 2013: Issue is obsolete. Both dest_ref=* and destination_ref=* are no longer used for ways. (destination_ref=* is still being used several times for Relation:destination sign and should be changed to ref=* in that context, but that will have to be discussed and solved there and not here.)

When writing the proposal I originally proposed the key destination:sign=*. After some comments it was clear that the word sign is ambiguous and the key was changed to destination:symbol=*.