Other types of cabinet which already exists

See also (didn't check if the pages exist, but tags are in use): power=cable_distribution_cabinet, traffic_signals=controller Alv (talk) 16:17, 10 February 2014 (UTC)

Indeed, this proposal aims to replace those tags as primary key. It let domain specific tags be used to give more details. Fanfouer (talk) 19:54, 10 February 2014 (UTC)

I'm not sure to understand properly what you meant. Is VRAD a company or a kind of device ? Of course operator=* only references an operating company (which is actually different from owner=*) and street_cabinet=* is here to precise hat kind of equipment is hosted inside the cabinet.
If you see practical improvements on the proposal, please let us know. Fanfouer (talk) 22:22, 25 March 2014 (UTC)

Seems likely this will gradually see some interest from UK people curious to understand where the "Cabinet" which does (or doesn't as the case may be) provide them with FTTC actually is. BT Openreach updated their guidance to mention the number of your cabinet. So suddenly people who'd never really thought before about how the Internet reaches them are wondering "Where is Cabinet 18 and why can't I have fibre?". In most cases "Cabinet 18" (or whatever number yours is) will be a street cabinet like the ones proposed to be handled by this OSM feature, with the number 18 on it, most likely stencilled in white paint, but occasionally marked with stickers, hand-painted or crudely added with marker pen by a frustrated Openreach engineer. Note that shiny, usually newer and bigger green cabinets responsible for making FTTC actually happen don't have such numbers. Each is associated with a nearby numbered "PCP" though, sometimes right next to it, on other occasions found on the far side of a road or a short walk down the road. When newly installed you can often see where the pavement was dug up to connect them to the PCP.

The cabinet numbers aren't unique. But they're still good enough for an OSM ref= tag. You won't (or at least shouldn't) find more than one with the same number in the same locality. Tialaramex (talk) 21:37, 10 April 2014 (UTC) 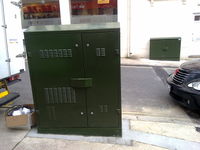 Thank you so much for these interesting pieces of information !
I think the situation you mention can be illustrated by one picture of the examples section
Do you know the name of such PCP/FTTC Cabinet numbers ? ref=* is good for common references but it would be great to create a tag in the ref:* namespace to allow mappers to map them and to know what they correspond to.
Fanfouer (talk) 19:08, 14 April 2014 (UTC)

Can you add pictures of them in this wiki as for illustrating the example section of the proposal please ?
They should appear in the Cable TV example section I've just added.
Fanfouer (talk) 19:08, 14 April 2014 (UTC)

These don't usually have externally visible numbers (they are numbered though, if a vandal breaks one open you'll find the number written inside the door to tell the cable TV company which one needs fixing). BT Cabinets have varied in appearance over the years, but they'll tend to be bigger, there won't be many of them near your street and they often will have a visible number. If you're not sure, often nearby paving covers will be labelled with "BT" the old BT "T" in a circle logo, "PO" or on really old ones "Post Office" for telephone equipment, whereas covers on Cable TV stuff usually say "CATV" the name of an old local cable TV company (e.g. NYNEX, Cable & Wireless) or are just blank. Tialaramex (talk) 21:37, 10 April 2014 (UTC)

That's really a good documentation job and thank you for telling us :)
I'm thinking about adding it to the proposal or to complete local pages once it has been adopted.
Fanfouer (talk) 19:08, 14 April 2014 (UTC)

There is a bit of confusion for me at the moment in what should be defined as CATV and which are telcom; not becuse I can't find who uses them but that most CATV systems localy (in three spots in the UK) have for much of the last 20-15 years offered both telephone/internet services as well as Television and so all the infrestucture including these boxes have both types of system inside all cabnets and just about all the cables to homes I've seen two (they commonly use multi-axil {like two cables fused together down one side} to simplyfy fitting and keep runs logicly linked out of the distribution box to homes.

Simply saying old telepone business are telco and old CATV companies are CATV might make sense till it is relised that both businesses are beginning to be doing the same dual purposeing of there boxes and the internet 3rd use shared by both muddies the CATV definition further in future. The Goverment merged all the communication Regulators because of this convergence in operations (they did the same for energy companies too after gas firms and electricity firms bought each other after privertisation.

So keeping things smple if we no the box dose have parts to do both CATV and telecom do we mark it as "street_cabinet" = "cable_tv;telecom" for old CATV Supplier that is now "operator" = "Virgin" ?

When mapping a major natural gas pipeline, I came across this ensemble, 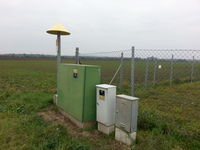 with a closeup of the center cabinet: 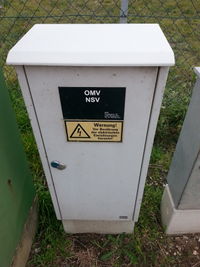 The sign on left & center cabinets read: "OMV NSV" and "OMV NSV Gä T 2". OMV is the operator, don't know what "NSV" means. "Gä" is for the city of Gänserndorf. Guess they contain electrical equipment necessary for the operation of the pipeline.

What I want to show with this example: Gas cabinets are not only used for urban gas distribution, but also for long-distance pipelines. the ones in the picture are located at a track between acres of crop fields. technically speaking, they therefore aren't STREET_cabinets. --Rfuegen (talk) 23:39, 31 October 2014 (UTC)

Thank you Rfuegen to highlight this.
May we consider another kind of street cabinet : street_cabinet=gas_management?
In such cabinets, gas isn't running into pipes but there are devices which monitor or drive gas flow.
It would be the same functions like street_cabinet=water_management. Fanfouer (talk) 21:31, 1 November 2014 (UTC)

Rfuegen put STREET in all caps, meaning that was the part that was wrong. This tag should have been called service_cabinet or utility_cabinet. The tag, "street_cabinet" is too narrow in scope which makes it confusing when used on objects far away from any streets.--Rassilon (talk) 01:46, 22 March 2019 (UTC)