I like the proposal, it's also usefull for dog owners. But we will need a good icon to avoid confusion with sources / drinking water for humans..--JND 20:06, 11 November 2008 (UTC)

I think that water fountains for humans that have a lower spout/bowl/trough for animals should be excluded from this proposal and add a animals=yes tag to amenity=drinking_water. That will allow a single node to contain all of the relevant information. - sadam 13:47, 29 November 2008 (UTC)

I would prefere to add a tag animals=yes to allready existing amenity=drinking_water if animals are allowed to drink. If the water is not completly suited for humans, let say "drinkable, allowed, but water is not controlled" then add a new proposal with quality=not_controlled/controlled/risky

Wouldn't it be much better to put a series of extra tags on amenity=drinking_water instead of making an all new tag? animal=yes will indicate that it is accessible for animals while human=no would indicate that it is not recommended for human consumption. --Skippern 18:16, 29 November 2008 (UTC)

The syntax animals=yes humans=yes really looks like the motocar=yes and legal access stuff. As such, I would prefere animals=yes / humans=no to be kept for "do they have the right to or not". For example, some fountains are not allowed to dogs because they could "polute" the water. While they would be happy to do so, if you are cought, you will have to pay a fine. But if your dog/horse is allowed to, but the quality of the water is known to be risky or uncontrolled , I would then use another tag to say that.

Examples (some are extrem !): A fountain in a park, where dogs are allowed to drink, humans are too, but it is full of Chlorine and you will only use it if you are in extrem thirst :

A mountain spring where there are no controls at all, and restrictions at all :

Artificial source of water that is controlled and good for every one but dogs are not allowed (while horses are ! )

Artificial source of water allowed to all, but no controll is ever made (it might be drinkable, and almost surely is, but no one knows ):

The last, the one you want to tag : A body of water or water supply suitable for and accessible to animals.

The sumary of all that, is, amenity=drinking_water is not written to be forbidden to animals, and since when a human can drink a animal can, I don't realy see the point in creating a new tag. That's only my thought, I might well have forgotten something Sletuffe 18:43, 29 November 2008 (UTC)

If you plan to add this to any body of water than I can think of many that will have human=no, such are most often bodies of water used as source for drinking water plants, but for some strange reason, at least up until I moved from Norway, many such allowed various other things, such as fishing, bathing, water planes to land and take of, sailboats and more. Most widely used would probably be animals=yes/no/restricted. The nature of the restriction can for instance be dogs only, horses only, and such. This should be solved by the use of sub keys. animals=yes with animals:horses=no would indicate all animals except horses can drink. --Skippern 18:49, 29 November 2008 (UTC)

If I understand you well, you say that there might be a physical access (bathing for example) but not drinking ? I can't thing of any, but in that case, yes "humans=yes" would not be explicit enough. So I would probably keep that for things on wich "access" can only mean "allowed to drink the water" (drinking_water spring fountain )
As of you subsclass system, I think animals=yes and horses=no would be enough since we know already an horse is a subset of animals. ( See my proposition here about that : Proposed features/Any moving thing grouping system‎ ) Sletuffe 19:03, 29 November 2008 (UTC)

Please keep things simple. The way I understand it, drinking_water says that a human will find suitable water here. Public occurances are drinking fountains (totally unsuitable for animals) and some rare faucets with a sign "drinking water", mostly found in areas where animals are not allowed. A watering place is an accessible stream or a trough designed for animals. Humans have a high risk of getting sick if they would drink there. So the majority of occasions are clearly seperated and easily identifyable. So I think two tags for two usages are appropriate and can be handled easily by all mappers. Cases where both tags might fit are very rare. A water qualification system is not in the scope of this proposal, neither is distinguishing various animals. The tags are just supposed to indicate the general usage. So I think introducing a complex system of tags or subtags for some rare cases is detrimental as it would confuse both mappers and users. I'd rather have a few details missing in a few cases if the majority of locations is easily tagged and easily understood. --Nop 23:45, 4 December 2008 (UTC)

You've got my full approval--JND 05:51, 5 December 2008 (UTC)
My examples are just complexe situations, the easy one whould be :
Nothing more
And in this case we have the possibility not to confuse things too much with :
* amenity=drinking_water + amenity=watering_place (when both are allowed, and suitable for both) (and also because 2 tags with different values are impossible in API 0.6) Sletuffe 18:28, 5 December 2008 (UTC)

In the alps there are many places with water for animals. those are mostly private however. While most people assume the water quality to be bad for drinking, I think it's simply rather disgusting than bad quality. Kinda like drinking from the same glass with other humans. The problem with such places is however, that they are mostly inside fenced of areas (however the reason for the fences is mostly so that the animals inside can't get out, not that hikers can't get in, as often hiking pathes into such fenced off areas), so it would be considered at least bad practice to lead your dog or mule (horses are not really good animals to ride in the mountains, while there are quite many people travelling with mules) to such a drinking water supply. Depending on how such a water supply is built, also fresh water pouring in could be drank. As for drinking_water supplies for humans, there are many were the water falls in from above into a big wooden basin. I think that animals are allowed to drink from the basin, because humans would drink the water before it enters the basin. Only in a case where the water supply entering is so few (dropping only) that filling up your bottle from it would take a long time, I think someone would actually have something against your animal drinking from it. Humans allowed: 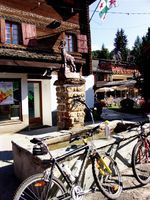 Yes, I know those places. It does not say so on the map features page, but I would only tag locations as drinking_water that are obviously safe for human use (drinking fountains and faucets) or that are marked with a sign "drinking water". All other places may or may not be safe, use them on your own risk, but I would not tag them as drinking_water. To me, drinking water does not mean "may be drinkable" but "is designated and safe to drink".
If a water supply is on private ground or behind a fence, I would not tag it as such as it is not accessible, at least not legally. The first picture you posted would be amenity=drinking_water, animnals=yes, as it has a sign declaring it suitable for drinking but the shape allows access to animals and I think the drinking_water should have precedence. The second picture on the other hand would be amenity=fountain or amenity=watering_place to me, as the fountain has no sign "drinking water" I would not tag it as safe for humans. --Nop 13:48, 5 December 2008 (UTC)

Well alpages are often on private ground, however with passing right given to anyone. So they are accessible. Mostly there are gates with signs like "please keep gate closed" or "close after crossing". For the second one, such fountains with drinking water are absolutely safe to use in Switzerland. This is definitely setup for hikers to fill up their water bottles even if no sign says "eau potable / Trinkwasser / drinking_water". It's a bit up to local knowledge/customs to know wheter it's drinking water or not. I would rather say the opposite for Switzerland and Austria: As long as no signs tells you that it's not drinking water it has to be drinking water, otherwise the operator/community could be sued if water is unfit for drinking. And even if a sign tells you "no drinking water" - it mostly is drinking water nevertheless - just some restaurants/shops opposing free water near to their POS.--Extremecarver 16:53, 5 December 2008 (UTC)

This is exactly the same in france. I'm tagging your second picture with drinking_water and would like to add "quality=unknown" or any other tag to make distinction between : there is a sign who says "drinkable" and there are no signs but it's almost sure to be drinkable (or at least I have tried and I am not dead ;-) ). For the first I would tag drinking_water + animal=yes. Sletuffe 18:21, 5 December 2008 (UTC)

The end of this thread starts to look great, drinking_water=* with or without animal=* and optionally a quality=*, so what is than the difference between drinking_water=* and watering_place=*? One is constructed while the other is natural? --Skippern 18:47, 5 December 2008 (UTC)

It may be true in the alps, that an unmarked fountain is drinking_water, but in other areas, e.g. around here this is not a safe assumption. I would not drink from an unmarked fountain, it might be even for decorative purposes. Many times there is a sign "no drinking water". So I wouldn't tag anything as "drinking_water" if I am not sure it is suitable and would drink from there myself.
But we are discussing the implications of the tag drinking_water, which I do not intend to change, rather than the extension intended by this proposal. A watering place would still be a place where animals can drink, but humans should not, that so far went untagged. A good example would be the first picture if the sign said "eau non potable" - or if there is no sign and you doubt the water quality as I would. Another example would be any stream or river bank low enough to allow access to animals or shallow stretches where animals can wade in to drink. No human should drink there, but exactly those places are the main interest for animal owners. --Nop 00:23, 6 December 2008 (UTC)

Why should no human drink from a clear stream of water in the mountains? I find this rather refreshing when I am hiking in the mountains. Why should such water places only be reserved for animals? The general rule of if the water is clear and running freely, than it is potable definitely applies to me, and I haven't been sick from this water yet. I would rather see a clear definition dividing drinking_water from watering_place, and I buy no arguments about human=yes/no and animal=yes/no. I rather see both as possible tags to both places, depending on local restrictions. And yes, a fountain is not drinking water unless specific posted, a natural fountain should rather be tagged natural=spring. --Skippern 12:56, 6 December 2008 (UTC)

A small stream in the mountains is usually drinkable. In all other areas, especially around agriculture you shouldn't try that. So I think those clear mountain streams are an exception rather than a good general base for a rule. --Nop 15:19, 6 December 2008 (UTC)