I'm sure it's explained somewhere in detail, but someone with ties to those organizations could add the answer to this question either here or at the page Humanitarian OSM Team: is the OpenStreetMap data used right now either on the ground, or in remote coordination centers? Only tales of planning meetings and conference talks promoting the idea of using OpenStreetMap data come up first in the linked-to-pages. Alv 18:40, 14 January 2010 (UTC) 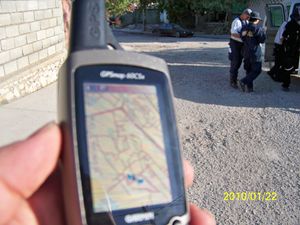 I hope this is the right place to post this. If not, please re-post in the correct location. I am currently in Port Au Prince with the Fairfax County Urban Search & Rescue Team (USA-1) out of Fairfax, VA, USA. I wish there was a way that I can express to you properly how important your OSM files were to us. Most of our team members own their own Garmin Rino and 60CSx units on top of the units we already have in the cache. Having these detailed maps on our GPS units is a big deal. Shortly after discovering your work I quickly spread the word and transferred the street level maps onto as many Garmin units as we could before sending the American rescue teams on the streets. The team members are thrilled to have this resource you have created. I wish you could see their faces 'light up' when I take their GPS unit and tell them that I'm going to give them street level detail maps. They have been working VERY hard and anything that can help them in every aspect of their mission here is greatly appreciated. I am spreading the word about this work to all rescue and humanitarian teams on the ground here in Haiti. Please be assured that we are using your data - I just wish we knew about this earlier. THANK YOU! If there is anything I can do to return the favor please let me know. My email is rocklandusa@gmail.com. User:Rocklandusa 13:40, 21 January 2010 (UTC)

Wow! Thanks so much for you message. It's really amazing to hear back from people using the OpenStreetMap data on-the-ground. It means a lot to all of the people involved in OpenStreetMap.
If you have any questions or difficulties with using our maps on the Garmin, we have some very knowledgeable folk on hand to help. Also any feedback on features you'd like to see/hide on the maps, dont hesitate to contact the OpenStretMap community
-- Harry Wood 14:30, 21 January 2010 (UTC)

Hi Rocklandusa, thanks for your message. It's great to know that our maps are useful to people on the ground, that's why we're making them. Here's how you can help us help you:
--Ævar Arnfjörð Bjarmason 14:49, 21 January 2010 (UTC)

This sort of message is really inspiring to us all. Something to keep in mind - the data is improving very rapidly so, if you're able to, try to update your data regularly. robert 16:05, 21 January 2010 (UTC)

The rectified image seems to be a little offset (20m?) in JOSM compared to Yahoo-Sat-Imagery.

In the meantime first gpx tracks are available which can be used to adjust the WMS images.

The rectified image seems to be a little offset (about 20m) in JOSM compared to Yahoo-Sat-Imagery. For example in Leogane

nodes and ways for damaged buildings?

Should we tag a traced damaged building (way) which is already tagged with building=collapsed also tag with a POI (node) in the middle with the tag building=collapsed? Or should we only use one of the two? I personnally think that the latter makes the counting of collapsed building easier.

I agree with only using one at a time, it’s usual practice on OSM. I take it you’ve found somewhere where two mappers have been active. Wynndale 13:22, 15 January 2010 (UTC)

It's level-of-detail thing where the OSM convention is... "Do it however you feel like" (or to put it another way, "do mapping in a way which you find fun") BUT a superior level of detail is always "preferred". That's not to say that you should feel obliged to draw in building outlines rather than mapping things as nodes (after all mapping 1000 nodes might well be more valuable than mapping 100 outlines), it's just "preferred" in the sense that you should not delete a building outline and convert it back to being node (And you should never do both)
The impact of this on anyone trying to use the data, is that there will always be a inconsistent jumbled mix of levels of detail within the map data. You just have to find ways of dealing with that. In this case, for a total number of damaged buildings you'll have to add up the node count and way count.
-- Harry Wood 14:09, 15 January 2010 (UTC)

sometimes the GeoEye images do not show in Potlach

it appears that the GeoEye are moving back and forth

It happened to me that the GeoEye are moving back and forth in Potlach. Sometimes they are a little bit more to the left (and up?) and then a little bit more to the right (and down?). It is quite a annoying and after you have moved some streets the images are again at a different place. E.g. the presidential palace which I have moved has now shifted again (not due to the earthquake but due to the movement of the GeoEye images). What is happening here? --ALE! 22:07, 16 January 2010 (UTC)

In JOSM the de-warping of GeoEye is less than perfect, although there the thiles do not stitch well vertically. Maybe depending on the center of the tiles and the zoom the outside area of the tiles moves? Basstoelpel 16:34, 21 January 2010 (UTC)

No, in area where I have mapped a building. The background moved apparently because the building and the streets have moved. --ALE! 23:12, 21 January 2010 (UTC)

My name's Evan; among other things, I founded http://wikitravel.org/ and http://identi.ca/. I care very deeply about Open Source and Open Content. Most people would call me a Freedom fundamentalist.

Right now, there's a duplication of effort on Google Mapmaker and OpenStreetMap to map remote areas of Haiti. That means each project is moving ahead 1/2 as fast as it could. Actually, probably 1/4; We all know that the value of a network (like a user-generated map) goes up with the square of the number of participants.

What can we do to fix this? Could new stuff added to Haiti be licensed CC-By or Public Domain, to be compatible? It wouldn't be copyleft, but it could be used by more folks. Could contributors flag their contributions as dual-licensed? --Evan Prodromou 00:24, 17 January 2010 (UTC)

I'm not very interested in sharing data with an non-non-profit organisation that would not, in return, share. Google is the only organisation to earn profit from data given by volunteers. Mapmaker's By-NC ? I'm not shure that Google doest not earn profit from data given by its mappers.
You know how was described (with humour) Communism ? Give me your clock and I will give you the time The deal is not equal.
Some contributors of OSM have announced on they own pages that their contributions were in the public domain. Google can build a bot to get those data.
Other data in OSM are freely available for everybody who want to share. Even for Google, if Google want to share...
FrViPofm 16:39, 17 January 2010 (UTC)

The whole section on imagery is very confusing. It needs to be made a lot simpler.

Please someone make it more like this. Make it a table with boundaries like that and example screenshots of the imagery (geoeye / digitalglobe / yahoo).

Then add the best WMS / Tile link for use in JOSM / Potlatch, or in the latter case show a screenshot of Potlatch's option dialog showing how to select the imagery (it has gravitystorm, the new geoeye & digitalglobe).

There are many different imagery versions now available. I think it is important to designate a 'master' imagery set for the various areas which people are working on. This would be the imagery set which would be definitive for positional information, thereby overcoming the 10meters here 20meters there displacement that one can experience when looking between the different imagery sets. Alternatively, only imagery rectified to a master positional setting should be used for positional information. Thoughts and comments? --Ceyockey 23:17, 17 January 2010 (UTC)

Before and After Quake

It would be very useful to have an imagery set with comparable resolution to the GeoEye post-Quake imagery to do a direct comparison of before and after views of particular buildings and roads. Do we have access to a pre-Quake imagery set which could be used for this purpose? I looked at the standard Yahoo WMS feed and it is not close to the resolution needed. --Ceyockey 23:48, 17 January 2010 (UTC)

Something like that (change transparency to see the aero) ?
Use the mapJumper and the mJLite bookmarklet to jump from one to the other (same lat lon, zoom).
FrViPofm 09:13, 18 January 2010 (UTC)

Well - this is very nice. However, the 'before' view is based on Google Imagery, which makes its use verboten for OSM contribution, even for verification of building collapse where such information might save lives, copyright law as it is. I would be happy for someone authoritative to say I'm wrong. --Ceyockey 03:05, 19 January 2010 (UTC)

I'm not a lawer, but...
The collapsed bridges are mapped against the after imagery, they are not collapsed on the before imagery. The before picture is used to make the comparison with the after. We are not mapping from the before imagery.
If I translate the Shakespear's King Lear against the available edition N, can I consult the copyrighted edition M to check my work ? FrViPofm 08:21, 19 January 2010 (UTC)

SAR zones are tagged FIXME=Delete when crisis is over.

I suggest, rather than deleting them when crisis will be over, to tag them and other crisis elements, M=archives + archives=N.

You can add other tags for other crisis elements.

I was just wondering why this would be useful. I think the trees rather distract from the important information. (First I thought, these where building tagged as collapsed.) --ALE! 23:14, 21 January 2010 (UTC)

I did this for two reasons. First, trees can contribute to complications in clearance and rebuilding activities later. Second, trees when they are sparse are potentially useful navigational references if they can be seen from a short distance when looking for a particular building. Third, in urban environments, trees are significant to quality of life and more likely to find a refugee sitting in the shade of a tree than in the shade of a building which might be unstable ... I'm thinking about the weather in this part (hearing news reports of high temperatures and little shelter as tent city creation has not started in earnest). I am not mapping trees any longer but moved on to other things outside of PaP. --Ceyockey 23:19, 21 January 2010 (UTC)

Most potential Haiti mappers should have found their info by now. At least in the first paragraph it is time (now or soon) to shift focus from mappers themselves to map users. --Frief 20:12, 21 February 2010 (UTC)

Number of Streets / Nodes before and after the earthquake

The planet.osm files go back to 2009. A good thing to do would be to run a series a Haiti extract on an old pre-earthquake planet file. Has anyone done this? That would allow you to easily count up nodes.
This old Haiti file could also be used to make a better "before" rendering for a smoother animation like this File:PaP.gif (which currently transitions from CloudMade to normal mapnik)
-- Harry Wood 11:49, 27 May 2010 (UTC)

Hi, I was wondering what needs to be done and how I could help with it. For instance, how needs to be done on mapping the status of infrastructure? How much is infrastructure changing the map as months pass? Are there sources of information regarding the situation in Haiti that can be combined with OSM like Voice of Kibera? (I'm not involved in organising the latter site, just giving an example.)

How often have areas been covered in the last few months?