Tucson is the second largest city in Arizona and the thirty second most populous city in the United States with 540,000 people ([1])

It would be great to recruit some new people to help with the Tucson map. At first glance it looks like a good map so far, but actually there is a lot to do. The majority of the roads are from US TIGER data and vary in quality from average to poor.

This page outlines some of the tasks. If you feel like helping then jump right in. It would be great to have Tucson become the best mapped population center in the State!

Note that you don't need a GPS unit to help with the map. A lot of work can be done by using the high resolution Yahoo satellite images. 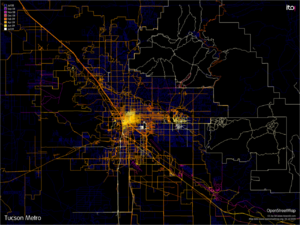 Some projects are listed below. They are not in order of priority. Green = completed.

Some additional project ideas can be found on the Mappa Mercia page.

First a bit of background. Tucson, Pima County and cities in the area, such as Green Valley and Marana, cooperate on GIS services and data. The database is managed and maintained by Pima County with the other agencies feeding data into the system, getting data out of the system, and paying for a share of the costs.

Access to all the data is by a Pima County FTP system, and to get access a person must sign documents saying that the data won't be used for commercial usage, etc. Under the County definitions, OSM is commercial usage. Commercial usage is possible for a fee and prior approval. The County sells data to companies like Mapquest, etc.

Ann Strine, the Director of Information Technology and the CIO for the City of Tucson emailed AndyAyre on 21st August 2009 with the following, as a result of some lengthy discussions:

The City provides GIS data to the public, as we do lots of other information. What we are not required to do is provide it in just any format that someone wants. That was the situation in a case I referred to - the data was available on the web, but this company wanted it in a specific format so they could incorporate into their product, which would then be for sale. That reworking we didn't have to do.

If you, or anyone else, enters data into O(pen Street Map that's fine, and if someone uses it for commercial purposes, there's not much the City can do. The point is that the City hasn't used resources to specially support one particular business.

The information on the County web site includes the City data within the county data.

Hope this helps. Have a good time with Open Street Map.

So it appears we have permission to use data from the City. The problem is that it is merged into the County GIS database and access is via County rules.

What are mapping parties?

Mapping parties are events where anyone can come and participate in the OpenStreetMap project. OpenStreetMap is a free, open source map that can be contributed, edited and used by anyone anywhere. Mapping parties are social events where experienced and new mappers can meet to share and learn more about the project. The events are generally held in a public place, and allow time for discussion, mapping and editing. The event is open to all.

It's fun. It's free. You can help. JOIN THE FREE MAP REVOLUTION!