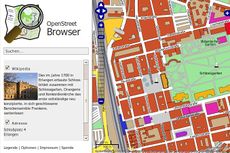 Example of the OpenStreetBrowser (Aug. 2010)

My name is Stefan and I live in southern Germany. In 2007 I accidently came to OSM and did (and still do) alot of mapping mainly in Franconia.

I was one of the people working on the OpenStreetBrowser. It happend that I came to this project in January 2010. I asked Skunk (the father of the OSB) how I could contribute to this great project and so my first task was to create svg-icons for the overlays. I than thought about how to improve the user interface of the OSB (plugins for navigation, measurements, gpx import etc.)

In March 2011 Mogstar and I started the project OpenTopoMap on a server at the University Erlangen-Nürnberg. Our aim is to render a map with contour lines, hillshading and a "professional" look (something like the official TK50).

In 2011 I attended the State of the Map Europe in Vienna. In 2012 Mogstar and me did a lightning talk about OpenTopoMap at FOSSGIS 2012.

Got any questions? Please write me an email via my osm account. Don't hesitate to contact me!