Currently mapping around Århus with a BT-747 A+.

Places I started mapping and/or made significant contributions to:

As opposed to Proposed_features/Scout_Camp, because I think the Dutch "blokhutten" don't fit in the "revised" proposal, but I might be wrong.

For small post boxes that are not emptied every day.

Residential roads that are not surfaced, but very accessible for normal cars and bikes. Typically compacted hardcore or pebble stone surface (track type grade 1 or 2). Mostly a shorthand for highway=residential, surface=unpaved. (I'm still using this although it's "deprecated" because I like it.)

A wall or screen restraining noise (typically from a road) from reaching residential areas. See the Wikipedia article about noise barriers.

Came across one of those and needed a tag. In my opinion this is not a footpath or a "normal" bridge and deserves a separate tag, though the highway category might not be the right one. I tagged the thing as a way from riverbank to riverbank.

I have tried to convert the AND house number information to OpenStreetMap input using the Karlsruhe schema for house numbering. Although the conversion is working quite ok, the data is of mediocre quality and there is no consensus on house numbering schemes (nor is this likely to ever happen...). Some examples and more information can be found here.

The database generated by this conversion can be queried here. 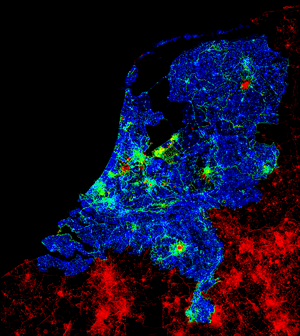 The Netherlands. Blue represents AND data, smoothly changing via green to red for new or changed data.

I wrote a small program for visualizing the number of changes since the import of the AND data in the Netherlands. For each pixel, the ratio of the number of nodes that are not touched since the AND import to the total number of nodes in the respective area is visualized as a colour between blue via green to red.

As ITO's OSM mapper application does a lot more, a lot better, I am not planning to develop this any further.

In January 2010 I made a visualization of the completeness of OSM in Denmark (shown to the right). The image is based on the per-pixel percentage of road names that appear in KMS adresses vs. OSM ways. Yellow areas such as København and Århus are (almost) complete. Black areas such as Randers and the coasts of north Sjælland are (almost) empty. White areas do not contain any KMS nodes. Other versions using different colours can be found here. A version in green & red is included in the Danish OSM promotion folder.

From October 2010, a new version is available as slippy map on osm.rasher.dk.