Writing biographic text reminds me of returning to school after 6 weeks of summer holiday freedom, only to have a pencil thrust into one's hand and being forced to write about how you purged the ability to produce written work from your brain...

After being frustrated with the lack of cycling information in a town which was built with an extensive cycling network (the grandly titled 'Cramlington Cycleway Network'), I started mapping and the rest is history.

My tools of choice have changed over the years from a Nokia Internet Tablet N800 running Maemo mapper, to Garmin GPS II+, Garmin#eTrex_Legend_HCx, a Garmin Oregon 550, then Garmin Oregon 650 (worse than 550), Garmin Oregon 750 (worse than 650). After Audio mapping with an Android phone acting as voice recorder and occasionally as a phone, Mapilliary image capture started to work reliably with a good JOSM plugin.

My 10-year old Garmin GPS II+ died from a loose aerial socket letting in water whilst teaching sailing at Newbiggin by the Sea Sailing Club, so the eTrex HCx came along. This has both the full UK OSM map (saving me the £150 for proprietary data), high sensitivity, and good accuracy with EGNOS. Moving to a Garmin Oregon 550 is a definite DOWNGRADE with much inferior GPS sensitivity, and a stupid touch-screen GUI that needs several steps to replace what could be done with three button presses in the HCx. It is better not to ask my opinion of the Garmin Oregon 650, and now Garmin Oregon 750 I also own - worse again!

After using the N800 to take track notes directly, I experimented with Photo mapping. Audio mapping started with a Nokia N900, and has moved to Android, supplemented with geo-referenced photos taken on the Garmin 550 + 750. Audio is great for mapping street names quickly on a bike without stopping, but camera images capture more detail for transcription. It all depends on the type of survey you are carrying out.

The mapping of Cramlington on a bicycle using the detailed left-hand kerb following cul-de-sac mapping technique took from January to September 2008. Slow, but accurate and you see a lot more of your area than you ever knew existed. 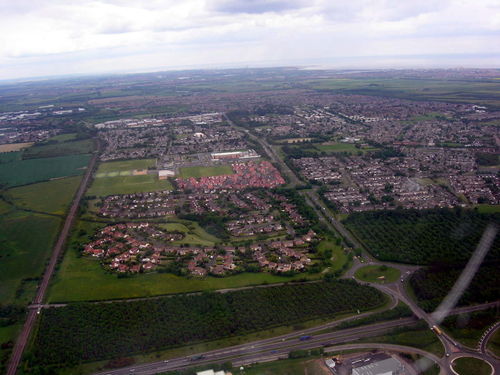 The next street-level mapping project was the nearby town of Blyth. After changing from Photo-mapping to Audio-mapping, progress was steady to complete by September 2009. Mapping of Bedlington and Bedlington Station followed by November 2009 and as my fitness improves, my radius of mapping extends. Killingworth was not too bad to map in the Summer, however cycling 10km before starting a trace doesn't give much daylight in Winter.

I'm also filling in areas around places I visit, and my sailing club at Newbiggin.

Areas that I've contributed to are: