LA2 is the username for Lars Aronsson, Sweden [1]. The same name is used on Wikipedia, OpenTom and Twitter.

In February 2006, I posted a presentation of myself and my GIS perspective on the OSM-talk mailing list.

In 2005, before OpenStreetMap had a city name search function, I started a gazetteer (place name register) with links to the maps. This has now moved to a subpage of its own: /Gazetteer.

July 12, 2012: During Wikimania 2012 in Washington DC, I learn about MapStory, a project for free historic maps and timeline data.

Coordinates are given as decimal degrees (fields 4,5) and as degrees-minutes-seconds (field 6,7). For many records, seconds are set to zero (0), implying that the values have been rounded. Seconds 10, 20, 30, 40 and 50 are also more common than other values, indicating that another level of rounding has been used for some records.

The 17 records that have elevation are not Sweden's 17 most important mountains, just some randomly picked hills:

April 6, 2008: I have drawn some more roads to, from and in Halmstad, Tylösand, Laholm. I have also added lakes north of 57°N and east of 14°E, using the lake walker plugin to JOSM. Tiles@home works alright, but lowzoom is lagging far behind.

March 17, 2008: I draw the river Indalsälven from Storsjön (Östersund) to the coast, and various roads around Östersund, Lycksele and Burträsk.

I hand draw lake Bolmen near Ljungby and some other lakes near Värnamo in Småland, Sweden.

How to systematically clean up those FIXMEs. The Osmxapi page describes a most useful feature. Suppose we want to address ways tagged with a note="FIXME previously unwayed segment" within our home region, bounded by longitude 15-20° E and latitude 55-60° N. Here's what you can do:

Now JOSM starts with a huge area containing all ways that are tagged like that. This area is too big for an OSM download, but you can zoom in on any cluster of ways and download full OSM data for that smaller area. 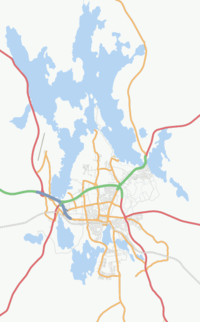 After lakes (light blue) were added, the OpenStreetMap of Växjö looks more complete. Roads no longer end in nowhere, but close to the lakeshore.

March 11, 2008: Drawing lakes and streams downstream from Växjö, Alvesta, Åsnen. When the map says "source=Landsat, WMS" that is not a seal of quality, but just as much a warning. I don't know how good these Landsat images are. What exactly is lake, land, reed and sailing harbours? Some day in the future I hope we get a better source for water.

February 27, 2008: In this week's planet.osm there are 211,951 occurrences of "FIXME", belonging to 206,486 ways, 5012 nodes and 9 relations. (Apparently some objects have multiple FIXMEs.) The most common patterns are note="FIXME previously unwayed segment" (166,291 occurrences), note="FIXME previously tagged segment" (13871), and note="FIXME unreviewed oneway" (9221). These numbers will be compared to those of the following week, because I'm removing FIXME tags from a lot of roads.

February 26-27, 2008: During a visit to Jönköping, I collect and upload tracks from parts of the town (Söder/Torpa, Södra infarten/Haga, Liljeholmen/Rosenlund) and start to draw streets. I also try to introduce OSM to some more people. Boivie helps out with street names. I add highway= tags to some old streets in Huskvarna, Aneby, Gränna that I mapped before attributes were introduced. There are many more such invisible streets in Nässjö, Eksjö and other cities.