This is pavi aka pavithran .

My OSM Diary which I use more for asking questions ;) is where I write my experiences.

The GPS chipset really is very weak . It just cant catch the signals from the satellites. It gives very inaccurate readings. I have been using trails,mapzen ( POI) and xGPS apps on it.

I would recommend Mapgen POI editor for collecting POI's but you need to patiently wait at a place for the signals . Also a bit of fiddling to get the accurate place .

Motion - X - GPS is a good tool which draws lines on the routes which you have covered over a OSM layer . Unfortunately it couldn't export waypoints with the track . PS: I no longer have an iphone !

I am using this device with my netbook EEE 901 . Debian GNU/Linux just works with it :)

Yes the complaint that it needs some time to get the fix is correct . But after that it runs nicely . I wonder if something happens after an hour or so because th track goes off /diverts to something very wrong . I was taking tracks with a motorbike hence might have disturbed the device on bumpy roads.

Good GPS chipset even worked while taking tracks from a metro train . As all GPS 's on phone, yes its a battery drainer . Apps include :

I started as everyone starts with potlatch . I just hated the yahoo imagery and the time it takes to load on slow indian connections . After that when I got the gps tracks it was a pleasent ride with potlatch but nevertheless it had something missing .

With its bing integration and a pleasant look P2 would help bring many newbies to contribute . Thanks a lot RichardF :D (Personally JOSM is still my favourite )

I installed java only for JOSM and I am not regretting it ! A great piece of software . Plugins like WMS,validator are just amazing . The learning curve is steep but with what you can do with JOSM its really worth the effort. I also liked the feature in which the slow moving GPS device is shown in red while fast tracks are shown in green . That would help me know where I stopped .

Having used it for a long time , I am more than content with JOSM but it is still very hard to convince a newbie to use JOSM :(

Being a part of community feels nice . Here are some of the events I attended/participated/organised . 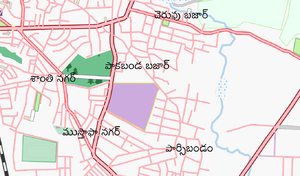 I love the impact of map data on to a rendered map , yes how it is rendered matters more to me as a visual guy :)

Primarily there are two renderering engines I used .

The best thing is it supports Telugu fonts . :)