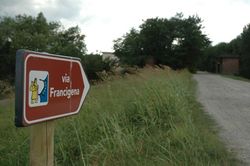 The Via Romea Francigena' or Via Francigena is an ancient road between Canterbury and Rome and beyond, which passes through England, France, Switzerland and Italy. It was an important medieval road and pilgrimage route connecting north-western Europe with Rome. In modern times, Via Francigena is one of the Cultural Routes of the Council of Europe (see https://www.viefrancigene.org/).

The mapping of the hiking version, Via Francigena

Via Francigena, is part of the European long-distance paths program. The EV5, that is the bicycle version of the pilgrimage, is mapped as an other relation.

For the hiking route, each country has a relation that matches the following example:

For the cycle route (see AEVF reference path) each country could have a relationship according to the following example:

For the cycle route (see EV5 reference path) each country could have a relationship according to the following example:

Don't forget mapping the amenities (shelter, fountain, drinking water, bench, toilets, pharmacy... amenity=*), shops (shop=*) and other touristic features (hostel, camp, picnic_site, viewpoint... tourism=*) along the way that could have interest for the pilgrims, but WITHOUT including them into the relation.