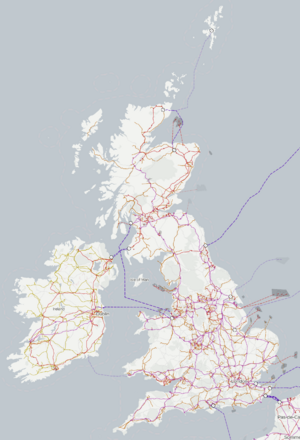 This page describes the power network in Great Britain but not the island of Ireland (which has a separate, integrated power grid across Northern Ireland and the Republic of Ireland). It's intended as a guide to accurately mapping the power network from aerial photos and by eye.

You can find a specialised map of power infrastructure in OSM on OpenInfraMap.

Please note: Most data available on the internet on power networks in the UK is not suitable for inclusion in OSM due to licensing incompatibilities. Please see the Data Sources section for more information.

The electricity network in Great Britain is split into two sections:

The transmission network consists of 400kV and 275kV power lines, and their associated substations. It's run by National Grid in England, and Scottish Hydro and Scottish Power in Scotland. It also includes the various interconnector cables which import and export power from Ireland, France, Belgium, the Netherlands, and Norway using high voltage DC.

If you see a power line tagged with a voltage which isn't in the above table, it's likely to be wrong. (But some offshore wind farms use unusual voltages - most often 150 kV and 220 kV - for their "export" cables.)

In the vast majority of cases, if a power line has three wires, it's a single three-phase circuit (cables=3). If it has six wires, it's two separate circuits (cables=6). The thin ground wire often found at the top of pylons is not included in the number of cables.

Power lines at 33 kV and above are often run in pairs (either two lines running side-by-side, or as two circuits on the same set of poles/towers), or as a ring around several substations, to provide redundancy in case of the failure of one line. 11 kV and similar distribution voltages are frequently an interconnected "web" and they may join multiple substations, but they are only usually fed from one at a time.

Power lines at 33 kV and above have short (2-4 character) alphanumeric reference numbers, such as "4VF". Poles/pylons along these routes are then numbered "4VF-1" etc. These are sometimes surveyable on the poles themselves, and can be added to the ref=* tag on the pole/pylon and the line. 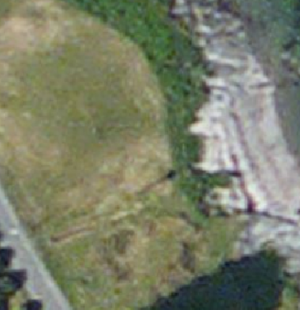 Subsea power distribution cables are common around the UK, especially in the Scottish islands. These are usually at 33 kV, though a few 132 kV and 11 kV cables exist. They can sometimes be identified from aerial photos when a reasonably large power line stops dead right by the sea. You'll usually see a diamond-shaped cable marker on the shore, and if you're very lucky this too can be spotted on the aerial photography. 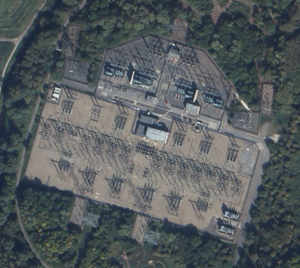 The name=* tag should contain the name of the substation, if known, such as "Waltham Cross Substation". It shouldn't contain the voltage, reference, or any other information - use other tags for that. As always, if you don't know the name, there shouldn't be a name tag.

The voltage=* tag should be used to denote the voltages used in the substation, in volts, with multiple voltages separated by semicolons. For transmission and larger distribution substations, the maximum voltage used should be easy to see from connecting power lines, but it may not be possible to tag the voltage of every substation.

Voltage can be inferred from aerial photos by the appearance of power lines and the spacing of busbars, and it's possible to pick up a bit of a knack for this. If a substation has visible busbars or power bays, it's unlikely to be less than 33kV.

These substations should be tagged with operator=National Grid PLC in England, and the appropriate operator in Scotland.

Traditional transmission substations, such as Waltham Cross, are very obvious from the large network of air-insulated busbars and switches. 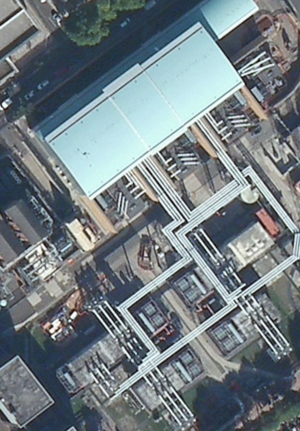 More modern transmission substations may use Gas Insulated Switchgear (GIS) for part or all of their switchgear, especially if they're space-constrained. This looks quite different from the old air-insulated switchgear, and most of it is enclosed within buildings connected with gas-insulated transmission lines which look like white tubes. These buildings can be tagged with power=switchgear, gas_insulated=yes.

Some transmission substations also share a site with a distribution substation, which is frequently referred to by the same name. These are administratively and technically separate entities, run by different operators. The easiest way to tag these, unless you're sure what you're doing, is as a single site with all voltages in the voltage=* tag.

Once power is handed over to the distribution network from the National Grid, it will probably pass through several substations before reaching your home.

Generally, the 132kV will be stepped down to 33 kV (sometimes 66 kV) for the first intermediate stage of distribution. These substations are sometimes referred to as grid substations or bulk supply points (BSPs). A rural 132 kV substation can service a radius of several hundred kilometres, while London's West End has three 132kV substations within 5 minutes' walk of each other, fed by underground tunnels.

Closer to the consumer, the voltage will then be stepped down to 11 kV or 6.6 kV at a primary substation for the next stage of distribution. In most areas, primary substations are reasonably-sized substations, but in very rural areas, they can be pole-mounted transformers. It's usually reasonable to assume that if a line does not terminate at a visible, fenced-off substation, it's 11 kV or below.

Finally, a secondary substation (sometimes just a transformer on a pole) will drop it down to 230V for domestic consumption.

Industrial customers may be fed power at 11kV, or occasionally at even higher voltages. In this case they will have their own substation, which should be tagged as substation=industrial.

It's common for multiple levels of substation to be located on the same site - so a 132kV substation might have a primary substation as well. It will output 33kV to send to other primary substations as well as 11kV for more local use. These are logically separate substations to the distribution network operator, they will often be physically separated on site, and may have separate entrances. However, it's not really worth tagging these differently, and voltage=132000;33000;11000 is acceptable here.

A small number of places have a power network which is not interconnected with the main GB power grid - these are islands, in both the technical and the geographical sense. In some cases these islands have a privately-operated power network which may not follow the same standards (e.g. voltages) as the rest of the GB power network. The general rules mentioned above may not apply.

Many of these islands had their electrical grids installed or substantially modernised in the 2000s/2010s, following the example of the Isle of Eigg.

There is a reasonable amount of data on the UK's power networks available on the internet, however most of this is not under an open license and hence should not be used to map in OSM.

Currently the sole exception to this is Western Power Distribution who since early 2021 have provided their power network data under an open license. Russss (talk) has confirmed by email that this data is suitable for inclusion in OSM.

An overlay of this data which is suitable for use in OSM editors is available at gb-power.russss.dev.