From OpenStreetMap Wiki
Jump to navigation Jump to search
Tag:power=transformer - Other languages

In more technical terms, a power transformer is composed of two or more windings which, by electromagnetic induction, transforms a system of alternating voltage and current into another system of voltage and current for the purpose of transmitting electrical power. The delivery is done at the same frequency than the input.

A transformer is tagged as a

. Transformers are usually located within substations and should be tagged as a node within an area tagged as power=substation.

It is not recommended to mix them with buildings. In case of indoor transformers, place a node inside the building area and add location=indoor on it.

For pole mounted transformers it is suggested to tag the pole as power=pole and add the tag transformer=distribution (or transformer=yes).

Many details about the transformer can be added using a more complete tagging scheme. It is particularly intended for mappers having some knowledge about power systems.

Where do I find such data ?

First of all, don't go inside power substations if you're not invited to do so please, it's dangerous and probably illegal. Public information or aerial imagery will help to see outdoor transforming facilities safely.

High detailed information may be found on transformers themselves. A complete datasheet as exposed beside gives many figures on the machine capabilities and structure.

We basically need voltages, windings structure but manufacturer=* and start_date=* may also be completed.

Nevertheless, you may not be able to take a picture of those plates and as a reminder: don't go inside restricted perimeters to get the one you couldn't unless invited.

location=kiosk was used to map small boxes, often manufactured and too small to be considered as actual building, hosting a transformer. man_made=street_cabinet + street_cabinet=power are more suitable to do so and get back location=* to give the cabinet's actual position (underground, indoor...)

Be careful to not confuse with substations, mapped with power=substation + substation=minor_distribution (see examples) which have more devices than only a transformer inside.

Transformers are designed to adapt voltage between their windings connected to interfaces. Interfaces are used to be called primary, secondary and so on. Several windings can compose a single interface (we find sometimes 2 or more windings on secondary interfaces of distribution source transformers). Transformers are always able to forward power in every direction they connect to.

Complex situations may occur and need extended keys to be accurately described in OSM. phases=*, rating=*, windings=* may be suffixed with :primary, :secondary, :tertiary, ... to give as specific values as it needs for a specific interface. If no suffix is used, the values will be considered as common to all interfaces of the transformer. All windings related to an interface (primary, secondary, ...) always operate at the same voltage. Electrical parts with different voltages cannot belong to the same the interface.

The convention OSM reviewed makes primary on the original producer side, like power generator or distant power plant whereas other sides including secondary sees consumers. Tertiary, quaternary and further sides are intended for lower voltages auxiliary services inside power plants or substations. Most producers usually step up their voltages for transmission (generator) toward consumers which makes by convention primary > secondary anywhere else in the infrastructure even if energy can actually flow in all directions on many intermediate nodes.

The most important for OSM is the consistency between transformer=* and voltages, particularly for facilities that both produce and consume power at different times. No choice is wrong when values are consistent.

Each interface is defined with its own voltage and transformers won't have a global voltage value. Use of voltage=* without suffix is discouraged on transformers. You are invited to use voltage:primary=*, voltage:secondary=* or voltage:tertiary=* instead according to the interface's name.

More voltages may be added following this way, depending on transformer's architecture you intend to describe.

Such information may help match both ways as following:

Since a transformer is composed of several windings, with many different possible configurations, see windings=* for more information. 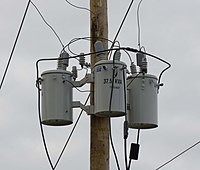 3 mono phase transformers on top of a wooden pole

Such a key will factorise as many features as possible on a same node. Thus, all keys giving figures or functions will have to be valued for a single device.

More example are available below, here the principle : 2 similar three-phase 50Hz transformers may be factorised as this on the same node : devices=2 + phases=3 + frequency=50.

Please note that, according to IEC 151-12-11, such disposal of transformers can't be properly called a bank since transformers aren't connected together but each one connected to a different live cable (or even different power circuit). A set would be more appropriate.

An actual bank can't be factorised on the same node (even if at the top of a pole) and for sake of accuracy, you'll have to use as many nodes as devices in the bank. If not, we loose information about the bank structure and how transformers are working together.

Here you see a few examples to show the main possibilities of transformer. See each transformer=* values examples for more occurrences.