This proposal has been split off from the Power generation refinement proposal in agreement with user Fanfouer. That original proposal was built by

This proposal aims to define properties of power substations. Further, it fixes the spelling of the power=sub_station tag and deprecates the confusing power=station tag. Finally, a detailed tagging scheme for substation components such as transformers is proposed.

There is a desire to map substations and their components in more details. Some ad hoc tags have appeared like power=transformer and the undocumented power=busbar tag. However, no consistent scheme dealing with all features and properties of a substation has so far be developed.

Wikipedia and IEC describe the power generation and substations in these terms:

Instead, the current OSM usage is the following:

To have an unambiguous and consistent power substation scheme, it is proposed to: 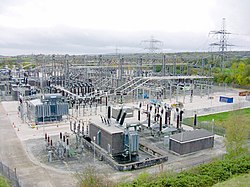 A substation performs switching of circuits, transforming of voltage and several other important functions in a power system.

This proposal fixes the spelling of power=sub_station, improves its voltage=* attribute and defines new attributes substation=* and location=*.

A substation should be tagged as follows:

Note: This section describes an advanced tagging scheme for substations. It is particularly intended for mappers having some knowledge about power systems. Furthermore, it will typically only be possible to use this scheme if very high resolution aerial imagery of the substation is available.

A typical substation comprises at least the following components: 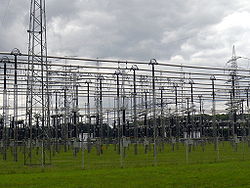 The busbar assembly makes connection to one or more circuits via the attached bays. The assembly comprises either rigid tubular conductors or flexible conductors. Strictly spoken, the term busbar refers to just one conductor but commonly an assembly of three busbars is also called a busbar [2]] which is the definition used here.

A bay connects an incoming circuit (power line, transformer, etc) to a busbar assembly. Each bay typically comprises circuit breakers, disconnectors, instrument transformers and surge arresters. It is suggested not to tag all these individual components. However, the circuit breaker may optionally be tagged as a switch.

A switch normally comprises a circuit breaker and is mostly found within bays but may also be used between busbar sections. Tag a

A transformer is tagged as a

For pole mounted transformers it is suggested to tag the pole as power=pole and add the tag transformer=distribution (or transformer=yes) (see below).

This proposal describes the attributes currently in use, that are not explained on the Tag:power=transformer wiki page, adds a location=* key for its physical location, and a transformer=* key to define its purpose.

General tags such as ref=* and operator=* may also be added when applicable.

For all power transformers not falling in one of the categories above no transformer attribute should be used.

General tags like name=* and operator=* may also be added.

Various components are used for controlling reactive power and voltage quality in a power grid. Here are some suggested tags for different types of compensators.

The voting has finished. The result is 22 votes in favour of the proposal and 2 against. The proposal has been approved.

You missed the point that the German interpretation is different from the English interpretation. This is an old well known issue. This proposal is trying to clean-up the mess and improve things. The migration plan can be discussed later once the new scheme is adopted. Tomorrow is another day. --Pieren (talk) 11:39, 8 October 2013 (UTC)
Judging from wikipedia, I understand that Trafohäuschen is the small building or even a box housing a single transformer. In that case it should be mapped as power=transformer and that way it'll be well distinctive from power=substation. In Russia have a similar distinction: power=station was used for large outdoor substations and power=sub_station was used for smaller ones which power a neighborhood (http://photos.wikimapia.org/p/00/03/18/31/60_full.jpg, http://foto.cheb.ru/foto/28720.htm). However the fact is that those should NOT have different primary tags: these are both substations and host multiple transformers. The difference is only the voltage or being a single building, which should be expressed in corresponding separate tags. I thus still find the new schema superior in all ways. --AMDmi3 (talk) 18:18, 31 October 2013 (UTC)