This proposal aims to clarify the current usage of the power=* key in electricity transmission context and replace some other obsolete values such as power=minor_line.
This is the second main version of the proposal : the first one was rejected on 2013 November 1. Voting and feedbacks are still visible at the bottom of this page.

This proposal is now abandoned due to its size and the numerous topics it impacts. Please have a look to following documents for further discussion.
This document shouldn't be updated any more. Updates are now applied in the two subsequent proposals.

Large above ground power transmission towers and their conductors are common navigational references (used by hikers and pilots for example). These facilities are widely mapped. Draw one line to represent the wires hanging off a string of poles, then add nodes along the line to represent towers. When mapping from an air photo it is often helpful to look for the shadow cast by each tower: the node should placed at the intersection of the shadow and the apparent base of the tower.

The best way to use them in OSM is to keep those simple definition and build a consistent tagging model.

It's not what is currently used, overhead and underground lines are using fairly different models:

Fanfouer (on osm, edits, contrib, heatmap, chngset com.) got full ownership of the proposal and start completing it. Here is a summary of all the removed stuff in this new version.
In the early hours of RFC, it was intented to deprecate power=tower and power=pole in favor of man_made=tower and man_made=pole. Pros argued that towers and poles are far less linked to power than conductors themselves. Thus, such features should be moved to man_made=*.
This was finally removed from this proposal due to the lack of consensus around it, and the pretty mess to retag millions of features.

In its first final version, this proposal intended to unify all power lines way of mapping behind power=line.
This was rejected, due to the well establishment of power=cable and the need to distinguish overground features from buried ones.
It intended to introduce new tags conductors=* and bundles=* respectively in replacement of wires=* and cables=*. This was removed due to a lack of necessity despite a logical way of thinking.
If the voltage of a power line is unknown, Schusch suggested to add low, medium, and high as possible values for voltage=*.

All those modifications would imply a little adaptation work for data consumers. We aim to be compliant with IEC definitions here and current model is not. If users wouldn't like to change their processes, they can use a current export of planet.osm. Nevertheless, re-tagging wouldn't be done until a long time.

Tagging is very important and first of all setup in a consistent way. We should take care of existing features, reuse them as often as we can but this proposal aims to refine model and will force us to re-tag some of these features.

Secondly, power lines are the main element of power transmission.
It's really important to have a reliable and consistent model to show them up on the map.
We'll expose a two-axis tagging model for power lines : overhead lines and underground/undersea cables.

Please note the stuff above is dedicated to describe the whole line. The point isn't to describe each different circuit which may be installed on it. Circuits description will be available with new

The goal here is to improve versatility of current model and to ease work for Proposed_features/Power_routing_proposal which is coming too.

When going through cities, power lines aren't going aerial but underground, underwater or even in tunnels.
Conductors may be grouped inside an insulation sleeve and distances between them are strongly reduced.

Power lines and cables dimensions are mainly influenced by a scale factor : voltage. Distance between conductors and distance between supports and conductors depends on the voltage the line is supposed to carry.
In OSM, voltage=* tag should be the only piece of information which allow mappers to map this scale factor. Nevertheless the usefulness of the line or cable question is left without answer.
Actually, power=minor_line is only a declination of power=line regarding its voltage and sometimes its usage. Furthermore, it's the only "scaled" value in power=*. It must be replaced by common power=line for two main reasons :

That's why this proposal is extending the definition of usage=* to give more information. Mappers can give more details about the theoretical power line usefulness without dealing with, sometimes complex, voltage considerations. 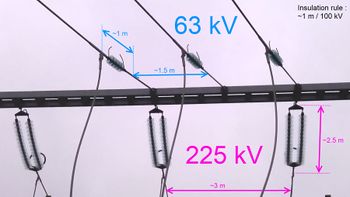 It's possible to determine the value of built-in voltage=* of a power line by looking at two main design constraints:

The main rule is just like that : about 1m per 100 kV.
According to picture, all the mapper has to do is looking at common power voltages running in its country to see which is the closest value for 1m and 2.5m. In France :

To be more accurate, it is possible to look on tower's base where the voltage is often available.

Referring to IEC definitions quoted above, a tower is a support that is normally four-sided and cross-arms built in wood or metal instead of a pole which is a single vertical element built in concrete or often in wood.
Such tags indicate structure of element and NOT its usage on a particular line (mainly depending on voltage).

Both should be used as described, regardless of voltage or any other rendering problem according to what


Here are a remainder of most used tags for both: 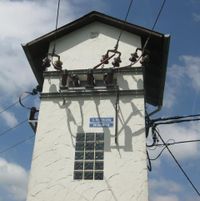 Terminals are useful to link power lines to building in an aerial way according to the picture.
They often can be encountered when connecting an overhead line to an indoor substation
They must be tagged accordingly :

Location transitions are very useful when power lines goes aerial and connect to underground or undersea cables.
Such transitions now often occurs with urban and suburbs development but with two main different types.

Adjacent substation proposal is dealing with it by introducing a dedicated type of transition substation : power=substation + substation=transition.
It represents the fenced area which surrounds the transition facility. Transition characteristics may be written with some other tags, please see the proposal for more information.

Concerning power lines, putting power=pole or power=tower, typically located in the middle of such transition substation, in common of both underground line and aerial line is enough.

Sometimes, features like transformers or switches could be hosted at top of poles or towers. This is often observed on local distribution lines.

Use switch=yes to host a power switch on a pole or tower.
References of both pole and switch may be distinguished with ref:pole=* and ref:switch=*.

Use connection=yes to signify there is a connection between power lines sharing the same pole or tower.
It is assumed it won't be possible to distinguish two different connections on the same support but this will be solved with power routing.

Every power lines are composed of sections abutted one after the other with junctions. When underground, each junction can be placed in a concrete box as for easing later access and protect the junction itself.
Let's introduce power=junction to map such junction boxes when we can see them during construction works.
You can see an example here.

Surface markers indicating the presence of such an underground power line should be mapped with the new value power=marker as suggested twice in the first vote process.

Connections between lines often occurs and two different circumstances : in free air or directly on supports, poles or towers.
They can be mapped with power=connection when occurring without support.
Have a look to this chapter to see how to map when on tower or poles.

Neutral conductor is a component of AC lines which may be present or not.
Typically on high voltage lines, operators would often choose not to add it because it's expensive. Earth will be the only way for power to go back to power plants and it's better like this.
But neutral will be there on local distribution lines, thus cables=* won't only reflect how many phases/poles we have on that particular lines.

neutral_conductors=* will be useful to precise :

As for sustainably identify features inside power networks, some existing codification schemes can be used in OSM. You can find details about them right below by following links.

EIC stands for Energy Identification Code and the scheme is used by power transport companies (TSO) in Europe.
Its main advantage is to be common to a large bunch of countries and allow us to locate any feature by using the geographical prefix in the codes.
You can find details on the ENTSO-E website
The codes can be set on features with the ref:ensto:eic=* key.

To avoid confusion in routing and navigation tools, we must adopt strict guidelines to map power lines (like any other linear stuff like roads or railroads).

One line = one situation

power=line must group features with the same characteristics, especially the same number of circuits. When a tag key or value changes (or needs to be added/removed), the line feature must end and a new line start so that the properties can be correctly tagged, just as with any other feature in OSM.

Alv (on osm, edits, contrib, heatmap, chngset com.) suggested on talk, layer=* is needed when there are two different

power=line partially sharing some of the poles on some stretch, like in the image on the left. (In the past some suggested not to map these as two ways, but that seems wrong when the other line doesn't touch all the nodes, yet the other line has to touch all of the pole nodes.
Their circuits are not directly connected here. The line mounted higher is maybe 10 to 25 kV, and the lower line (probably 400V) has more densely spaced poles because of the street/footway lamps it feeds. A power line way should only touch the pole/tower nodes that the conductors "touch" (via the insulators, naturally).
The elevation hardly ever corresponds to a building level, except where the line penetrates the wall of the building it was built to feed.

This situation differs when two or several circuits (even from different voltages) shares exactly the same supports and must be mapped as a single power=line. 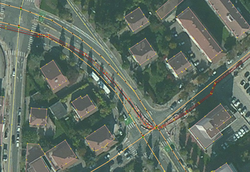 Annecy'nergie 2013 is another project conduced by RTE and it aims to put underground all suburbs overhead lines, like in many other French cities.
Furthermore, some substations were created to sustain increasing place demand of electricity.

Such local lines support power transit between last transformer to consumers.
They can run along roads or be underground, especially in cities or suburbs
When distribution is done with alternative current, a neutral conductor is part of the lines.

Voltage is here given between neutral and phase !

HVDC power lines are used to carry power at high voltage and through long distances.
They are currently highly recommended due to the massive intercontinental power lines roll-out.

Voting has not started yet.

8 pros against 20 cons : the proposal is rejected.
Work will keep going on this and take in account all the feedbacks exposed here.
Thank you.