This page is being considered for cleanup. Please discuss this page.
Not sure what help it is having this page and Power. I suggest merging them. 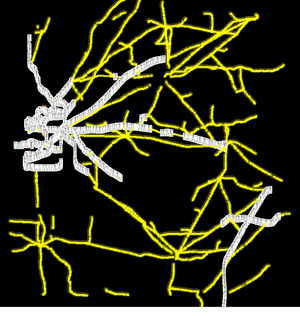 transmission lines in Memphis, TN with some pylons

This is a project to map and document all power networks on the planet. This could be power lines, tower and substations. But also gas or oil lines.
To view guidelines regarding power generation see Power_generation page.

If you are a power user, why not join the category:power user.

There is an IRC channel for discussing power networks and other infrastructure: irc.oftc.net #osm-infrastructure.

An HVDC is a powerline where for transmission DC instead of AC is used. As DC cannot be transformed like AC, AC has to be transformed to the desired voltage level, rectified and at the end of the line converted into AC again. As this requires expensive equipment the use of DC for power transmission is normally done only in the following case:

For the first case also plants are used, in which the conversion process into DC and back again into AC is done in the same plant. One calls these plants "back-to-back stations". HVDC transmissions are either monopolar or bipolar. At a monopolar transmission one pole is grounded and sometimes even the ground is used as second conductor while the other has a high potential against ground. At bipolar lines one pole has positive potential to ground and the other negative. The ground or a conductor grounded at a single point, which is called metallic return, is used as common return of both poles.

The location of grounding points, which can be situated on land or in the sea, must be chosen very carefully, in order to prevent electrochemical corrosion. Therefore lines, the such called electrode lines, between the grounding point and the converter stations are required. The voltage level of these lines is not constant. It is the product of line current and ground resistance plus resistance of electrode line. In ideal systems it would be o volts, but in practice it may got values until 2 kV.

Electrode lines can be realized as overhead line or as underground cable. They can be installed on separate towers or use the towers carrying the high-voltage pole(s) of the HVDC transmission where they can, as they run to ground, also serve as ground conductor, whereby they have to be fixed on insulators equipped with lightning arrestors. In some cases ( HVDC Pacific-Intertie, HVDC CU, HVDC Square Butte and HVDC Vancouver Island) the electrode line is installed on towers of an AC line. The installation of conductors of the high voltage poles of DC lines on AC towers was so far only realized in the switchyard of HVDC Volgograd-Donbass at Volgograd and at HVDC Kontiskan at Stenkullen, Sweden, whereby latter towers do not exist any more. However in China HVDC Hubei - Shanghai and HVDC Gezhouba - Shanghai use in most part of its length the same towers.

As switches for HVDC are poorly available, so far HVDC is used nearly only for point-to-point transmissions and most realized systems consist of just 2 stations interconnected by the line. There are also a few multiterminal transmissions, but at no realized scheme more than 2 HVDC lines depart.

A good list of HVDC schemes can be found on https://en.wikipedia.org/wiki/List_of_HVDC_projects . Most of these schemes are mapped at least in overhead sections already on Openstreetmap. However no map of all existing HVDC schemes exist in the internet as there are no detailed maps of all schemes or groups of schemes.

The full list of power-related tags can be found on the power=* page.

You may find side information regarding socket=* or power_supply=*. 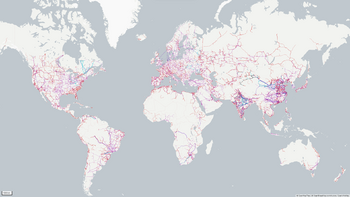 OpenInfraMap renders electricity, telecommunications, water, petroleum, and microwave communications infrastructure, also features a similar rendering of power lines in one of its overlays, Names of substations and their highest voltage, and power plants are also indicated.

Another visualization can be seen at Flosm.de.

Another visualization for part of Ukraine can be seen at nadoloni.com.

See pipeline=substation for any facility involving pipelines for inspection, compression or storage 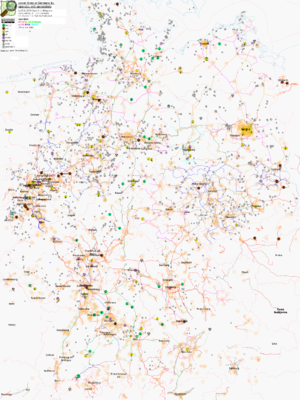 Local projects intend to document practices, knowledge and mapping guidelines relevent for a particular area in the world only.
Feel free to create a dedicated one for your region if missing. Such page should only cover partiular area (like countries or region) but not a given infrastructure or facility for sake of consistency.