The power=* tag is used to identify a wide range of facilities and features that relate to the generation and distribution of electrical power including power lines, power generation, pylons and sub-stations. WikiProject Power networks gives more details of the project to map electricity distribution.

Frequently, pylons carry multiple lines even at different voltages to save space.

The distribution network lines operate at 20 kV in most rural regions and are installed on wooden, concrete or small metal poles. 3 or 6 single wires, usually no ground wire. Single remote houses or farmyards may be supplied by 950 V lines of similar appearance.

Voltages used are like those used in the United States, and the frequency is 60 Hz. The household voltage is 220 volts, 60 Hz, somehow double the 110/220 volts lines once used in the US, before it is raised to 115/230 volts and the current 120/240 volts, though people still refer them as 110 V volts. Standard voltages for power lines, follow this hierarchy, from low to high voltage, and further information can be seen in WikiProject Power networks/Philippines and User:TagaSanPedroAko/Philippines Tagging/Power lines.

OpenInfraMap renders electricity, telecommunications, water, petroleum, and microwave communications infrastructure, also features a similar rendering of power lines in one of its overlays, Names of substations and their highest voltage, and power plants are also indicated. 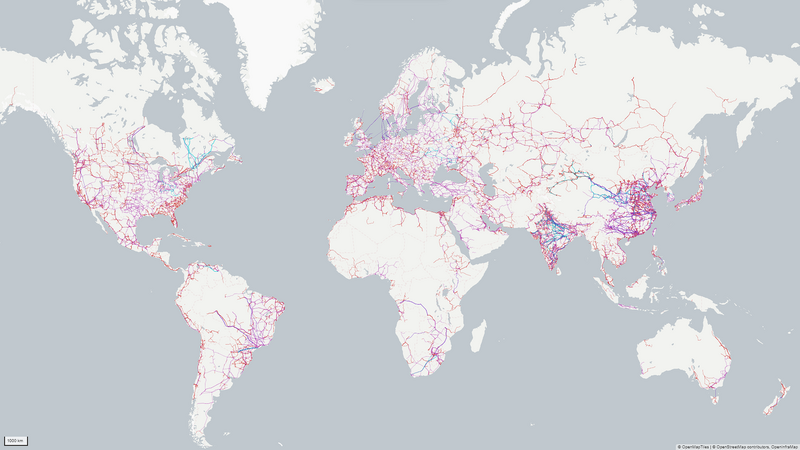 Another visualization can be seen at Flosm.de.

Another visualization for part of Ukraine can be seen at nadoloni.com.