From OpenStreetMap Wiki
Jump to navigation Jump to search
Key:power - Other languages 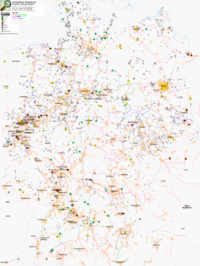 Very useful for navigation. Some pylons are accessible and can be marked, but I imagine the main method of data collection would be using bearings.

It might be worth specifying that this only gets used for the large power lines (x00,000 volts strung from latticework pylons) — if we were to mark the 800 V insulated cables between telegraph poles, it might confuse people looking for a much larger structure)

All towers also have a single earth wire strung from the top. O.S. maps distinguish between power lines on poles and those on towers. We could go further with identifying characteristics, and I would suggest at least tagging the number of wires in each group, e.g. wires=single wires=double wires=quad — these would apply only to the 'towers' type of line. -- Andrew Findlay 10:08, 6 November 2006 (UTC) (updated 13th Nov 2006)