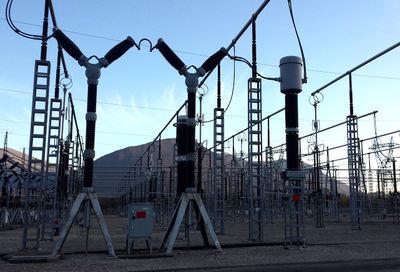 Here is a little but necessary technical introduction

A switching device is intended to break the current in a given power line or equipment. Many sorts actually exist in power grids, at different scales to protect or control how electricity flows through the network both for maintenance or security purposes.
To know where and how they operate in the network can allow data consumers to improve a lot their own comprehension of such systems.

This proposal can be directly linked the the IEC 441 section where many useful definitions can be read.

Here are an extract of the most useful to have in mind :

Switches can be found in any system, alternative or direct current ones. Event it is actually recommanded to cut phases, switches can cut neutral or earthing conductors too.

It is possible to combine these different devices to meet security or breaking capabilities according to the environment of operation.
As you may understand, power switches won't offer any kind of overload detection. Switches have to be controlled by appropriate devices which will operate as quickly as they can to protect the power transmission chain.
A power switch is equivalent to a railway switch or a pipeline valve and they are both widely mapped around the world.

It is proposed to use the switch=* key to complete information about power switches on OSM.
Such devices can be found in substations, on top of poles or in domestic places.

As other features like valves, the map can easily be cluttered if mappers add all - sometimes irrelevant - switches. Only a certain amount of them are described here and are proposed to be mapped.

Please don't go inside power substations if you're not invited to do so, it's dangerous and probably illegal.
Aerial imagery will help to see outdoor switch facilities safely.

On every switching device found, add a

and put some tags described below.
Use location=* to give information about its position and switch=* to let us know about its function.

You may find mechanically linked switches as to prevent them to be operated independently (mainly on poly-phase systems). They often have the same figures and functions.
You are free to map every single switch with nodes (using cables=1 on each) or placing a single node in the middle of them and use cables=* to give the exact amount of device.

Elsewhere you may find several switch electrically linked to operate on the same phase or pole. It is strongly recommended to map every single device with a dedicated node since all device won't necessarily have the same figures and functions.

This key gives information about the function of the switch, answering to the question why have we to put a switch there ?. It's not question of its shape or whatever else.

And you can obviously add as much precise values as you may need to this incomplete list.

Examples are focused on substations and distribution networks, where switches can easily be seen.
As a common device, you can find many similar shaped devices in many similar places around the world. The example list will probably be improved later, if the switch=* key get adopted.

Sun, mountains and French Alps substations, here you get some big switches.
Sevral pictures are taken from the outside of power facilities. It is possible to safely collect information from the outside without going inside as shown below.

Distribution switches can be seen in the country where distributon networks goes aerial. They are often on top of poles.

It was approved with 16 votes for and 5 abstentions.

Got the point. No power:switch because it is used in combination with power=* key (switch, pole or even tower). There are no power:substation, power:pole or even power:location as well.
You can use the same context in overpass query : ["power"]["switch"]. Fanfouer (talk) 17:22, 10 December 2016 (UTC)

Thank you Nakaner, technical terms and definition are taken from IEC website. Vendors and providers catalogs can differ from theory, but I would definitely prefer to bind OSM documentation to IEC for consistency sake Fanfouer (talk) 17:22, 10 December 2016 (UTC)

Here are resources related to post-vote cleanup of this proposal