From OpenStreetMap Wiki
Jump to navigation Jump to search
Tag:power=line - Other languages

The tag power=line is use to map high-voltage power lines used for power transmission, usually supported by towers or pylons

A power line is usually carried on power=tower. Draw one way for all circuits connected to one power tower. All lines forming the transmission system are power=line.

For lines of the distribution system (from mains voltage to about 45 kV, depending on the country or area), usually carried on poles, use power=minor_line. Use power=cable for underground or underwater power cables.

way and add the power=line to it. The towers that support the power line can be mapped using

power=tower. It is not necessary to tag power lines with a layer=* unless two lines cross over each other.

It is possible to connect power lines to power=portal inside power=substation using power=insulator on the connecting node.
power=terminal is also used at the connection with buildings without a dedicated power tower or portal to support the end of the line.

It is also possible to give some additional and advanced information about power lines :

Since power lines conductors are high voltage and usually uninsulated, they can only be located overhead to protect them from grounding with external elements.

If a line has multiple circuits at different voltages, they should be listed individually, separated by semicolons. For example, if there are two circuits at 66 kV and one at 33 kV, the line should be tagged as:

If there are also multiple frequencies (only in the case of HVDC or traction power), the frequency=* tag should also be semicolon separated. In this case, the frequency=* tag should have the same number of semicolon-separated items as the voltage=* tag. For example, for a line carrying 220 kV and 110 kV at 50 Hz, as well as 110 kV at 16.7 Hz for traction power:

If a power line is technically designed for another voltage than it's operated, you may tag this with construction:voltage=*.

A typical illustration of a power line: high voltage conductors supported by towers/pylons 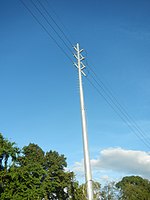 High voltage power lines are usually mounted on towers, but may be supported by poles, like this. Such should not be tagged power=minor_line

Three conductors correspond one circuit (except traction power lines and high voltage direct current/HVDC). Every circuit has one voltage=* level on which it operate.

Towers/pylons usually carry high voltage lines, but large poles are also used in some countries, typically on those forming the "subtransmission" grid, which connects the main transmission system to the distribution grids.

In addition to rendering on power lines on the standard OSM Carto view the following services are also available: