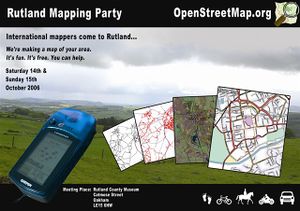 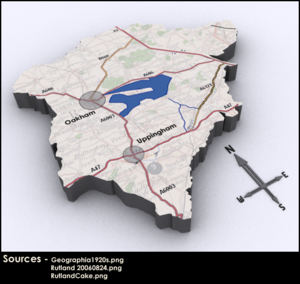 This Rutland Mapping Party is a past event which took place in October 2006. 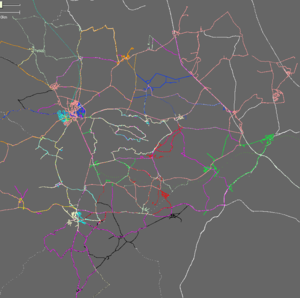 This mapping party took place way back in 2006. It was one of the larger events taking place early in the project's history.

A truly great weekend! We essentially achieved what we set out to do as can be seen from the gpx traces image on the right. Possibly a couple of roads and a village or two missed in the very north but otherwise we appear to have full coverage of all the highways, many bridleways and a scattering of footways. Both Oakham and Uppingham were fully mapped including all of the new Oakham Bypass which is not quite yet open.

Thanks to all the participants and those who came along to find out more about the project, including…. Anna, Andy Robinson, Ben Robbins, Clive, Chris Morley, David Field, Etienne, Grant Slater, Liz Wilson, Mathew Newton, Oliver White, Peter Golden, Richard Fairhurst, Tomasz Chomiuk. 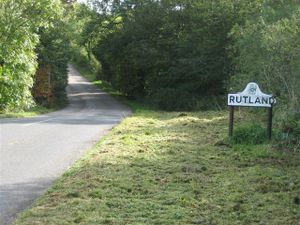 The main meeting point will be the Study Room at Rutland County Museum.

Check out the local weather forecast produced by Paul Bartlett, forecaster with Met. Office for Rutland area since 1960.

Bike hire - Rutland Cycling have two bases at Rutland Water from which to hire bikes for the day or longer.

In relation to the above, can people add where they would want to be staying, so that campsites can be contacted if nessesery. 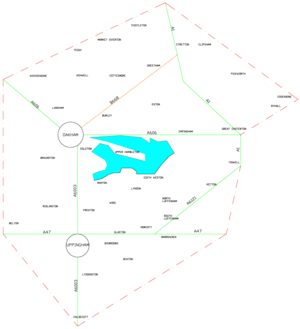 Rutland has two major towns. Oakham and Uppingham plus around 50 villages scattered around the county, all within a rural setting. For the full list see the main Rutland page.

While everyone is free to map where and what they like there is a big benefit in co-ordinating the effort. You can use the map schematic on the left as a guide or download the out of copyright OS map. If you have transport it is suggested that you sign up for one or more of the villages and centre yourself on them for your mapping. If you are on foot or plan an easier cycle perhaps you may wish to stay to the towns or the area around rutland water. There are of course also footpaths and the river as well. If you know what you want to map please jot it down here.

Cycling and walking events this weekend

There is a sponsored cycle ride on Sunday around Rutland Water starting at 10:30am. Someone might like to do that (it's a really pleasant ride, almost entirely off-road; strongly recommended).

For reference, I did that earlier this year (without GPS): it's about 17 miles and took under 3 hours - Matthew Newton.

There is also an associated set of walks, both around the main body of the reservoir, and the 4.5 miles of the Hambleton Peninsula. See here and here for more details.

On your travels, look for the following, record their positions, and photograph if possible: