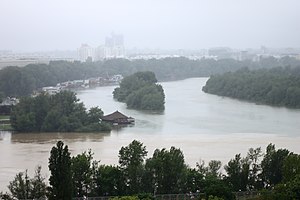 View of the Sava and Danube confluence in Belgrade, 17th May

The 2014 Southeast Europe floods is was a flood event back in May 2014, affecting a large area of Southeastern and Central Europe, particularly Bosnia Herzegovina and Serbia where rainfall was been the heaviest on record. The deathtoll reached double digits, with tens of thousands of people forced from their homes. Landslides were a hazard, and also landmines left over from past wars, which were disturbed by the floodwaters.

OpenStreetMap offers an online map (and spatial database) which is updated by the minute. Various tools and services allow data extracts for GIS specialists, Routable Garmin GPS data, Smartphone GPS navigation, and other device-compatible downloads. With an internet connection, regular syncing is possible with open access to the community contributed data as it comes in, with OpenStreetMap's bulk data downloads ideal for use offline. In addition, maps can also be printed to paper.

Browse the (example) Activation Area to get a feel for the data that is currently available. Different map styles including an Humanitarian style can be selected on the right side, and some data may not render (appear) on the map, but could be exported from the underlying database (See export section below).

See Downloading data for instructions on getting large scale map data, or see the focused exports below:

With the availibility of Small communication devices, Navigation Offline data proves to be very useful to the humanitarians deployed in foreign countries. We support the humanitarian NGO's using navigation data and invite them to give us feedback on the utilization of these devices in the context of field deployment.

About this Disaster Mapping Project

Hrvoje Bogner and Pierre Béland are coordinators of this Humanitarian activation. Send emails to hot@openstreetmap.org to reach HOT.

Daily extracts can be downloaded

Volunteers from the non-profit crowdsource mapping group MapAction were deployed to Belgrade in response to the severe flooding in Serbia and the Balkans. The volunteers produced several maps for example on the number of people in evacuation centres in Belgrade and on flood-affected areas in Serbia.

The various OSM developers communicate over internet through various communication channels. In 2013 they implemented the new Humanitarian Map Style, a map more adapted to humanitarian actions. This map, hosted by OpenStreetMap-fr, is integrated in various online map tools

The Tasking Manager and the JOSM editor are essential parts of this Activation. As new priorities are identified, new jobs are added to the Tasking Manager. It has allowed HOT to coordinate efforts of mappers around the world. LearnOSM.org offers learning material for beginners and more advanced mappers.

Some crisis response mapping may be appropriate to make quick improvements to the map in key areas.

Caution: There is an active mapping local community in these countries. We should take care to avoid damaging/swamping the valuable locally gathered data. General issues related to this are discussed on armchair mapping. Additionally for flood mapping, many tempting data items are in fact very temporary. Temporary data is not appropriate for putting into OpenStreetMap directly. It may be that in many areas there is very little potential for crisis mapping response to improve the OpenStreetMap data (As was the case with UK Floods 2014 for example). However...

The User:hbogner and others in the local community are suggesting some areas for remote mapping work:

Bing provides a global imagery data source that is the 'default' Imagery available for OSM (default option in most editors).

Mapbox provides a global imagery source and should be compared to Bing (typically use Bing for alignment if available and not instructed otherwise).

How to add/use Alternative Imagery

In many cases better imagery is available than the default; when possible we set up a remote link directly via the Tasking Manager, so there is nothing to do, the iD editor and (as long as enabled) JOSM will automatically add the imagery.

Additionally, with JOSM, it's relatively easy to add special imagery if the license is appropriate for tracing into OSM. For more details see JOSM Imagery Help

See these recent ideas UK Floods 2014#Hack ideas which were put together for the #floodhack event in the UK. There's lots of ways to improve tools in and around OpenStreetMap, but these are particularly in relation to flood response mapping.