Import of bus stops from the opensasa.info dataset. These are bus stops served by the SASA operated bus network in South Tyrol, Italy.

SASA is an operator of public transport in South Tyrol. SASA operates city bus lines in the cities Bolzano/Bozen and Merano/Meran, as well as some regional bus lines to the surrounding towns.

Recently, SASA published some of its data as “quasi open data” (CC-BY-NC) at opensasa.info. This includes list of bus stops for the lines they operate on. The data contains location, stop name, serviced lines and some information about facilities at the bus stop (benches, shelter).

We would like to use the list to complete OpenStreetMaps data about bus stops in this region. A special permission for importing this data into OpenStreetMap has already been arranged and confirmed.

After several discussions, the import was approved and finally done on October 9, 2013.

SASA started its open-data website opensasa.info in early 2013. Shortly after that, the OSM community began to get interested in the data because of its richness and completeness. Unfortunately, because of the relatively restrictive original data license (CC-3.0-BY-SA-NC), we had to negotiate a special permission to import the data.

The original bus-stops data set contains a large variety of fields, of which only a few are of interest for OSM: the (localized) names, available amenities at the stop (shelter, bench), a list of serviced bus routes and the reference number.

This is a manual one-time-import. JOSM will be used for checking, validation, conflation and upload of the data.

Only data fields that contain meaningful properties of the bus stops will be imported.

The following tags are used for the imported bus stops:

The necessary data transformations of the raw data is conducted in two steps:

Special care will be taken on how we treat the multilingual bus stop names: The original data has only one name field that contains both the Italian and German names in the form "<Italian name> - <German name>". The respective localized names name:it=* and name:de=* are automatically extracted from this string. For name=* we will use the concatenated name "<Italian name> - <German name>" in cities and towns where Italian is dominant, and "<German name> - <Italian name>" will be used elsewhere (as outlined here). For bus stops with names that are the same in both languages, the name will be in the non-concatenated form.

Furthermore, as the original dataset isn't very consistent with capitalization of (Italian) names and the use of abbreviations (Str. instead of Straße, v.le instead of viale, etc.) there is a separate post-processing step: This makes the names harmonize better with the naming convention of nearby OSM objects (such as street names, etc.).

A preview of the ready-to-be-merged-into-OSM data is found here: https://github.com/tyrasd/sasa-bus-stops/blob/master/sasa-bus-stops.geojson

A dedicated user, SASA bus stops import was created for this import.

If any volunteers come by we can easily split the import over multiple shoulders. Otherwise I'll be doing it by myself.

An automated script filters out bus stops that are not in the vicinity of already existing stops. The used buffer size was 100m – samples showed that this is a safe limit. The resulting subset of stops can be uploaded right away. The rest has to be conflated manually. This was split by administrative boundaries (communes) and is going to be conflated manually with JOSM.

The resulting osm files can be found on Github. 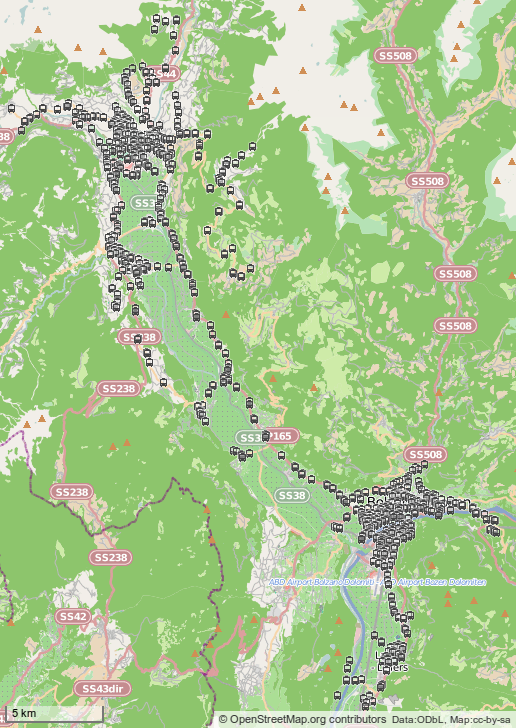